Are Ravens a Good Omen or a Bad Omen? 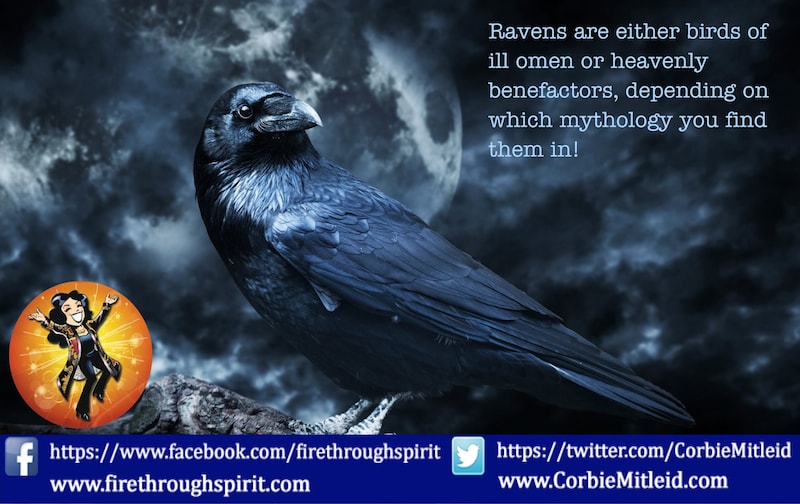 Are Ravens A Good Omen Or A Bad Omen?

Is the raven a cursed bird? I personally do not believe this, but during a divination the raven came up. My personal opinion is that the raven is a positive sign or omen because it is noted in the Bible. Could I have your opinion on this?

Diane, Raven is either horribly evil and an omen of death (Celtic legends, European tradition) or a most magnificent bird who is Humankind’s friend and spirit guide and has magical powers (Northwest Native American/First Nations tribes). It all depends on one’s traditions, point of view, and which folk tales one hears in childhood. But the bird itself is neutral — a natural creature with its own habits, behaviors and social structures.

Other animals that are either good or evil, depending on the culture, are creatures like snakes, wolves, and vultures. But again, it is the “spin” a particular civilization or religion puts on the animal that determines how it is viewed from country to country.

When you know the facts about ravens, it’s easy to see why they are high on the scale of Really Good (or Really Bad) depending on where the stories start.  Ravens are one of the smartest creatures on the planet, right up there with dolphins and chimpanzees.  They are absolute tricksters, and can follow complex situations.  They mimic better than parrots or macaws, and can imitate sounds as well as words.  They’re incredibly playful — watch a raven just ride the wind currents for fun, or find a flat something and go sliding down snowy roofs over and over again because they just CAN.  They use their beaks to point the way a human uses his fingers.  They can live just about anywhere, maintaining food sources and families and the flock from snow plains to deserts.  They show empathy with their buddies, consoling each other over a lost fight or a lost mate.  They mate for life and roam around in teenage “gangs” until they find that special someone — and lone ravens often play “aunt” or “uncle” to help a mated pair rear their young.

To find out more about my favorite bird, I recommend Mind of the Raven by Bernd Heinrich. This is a scientific examination (and a very good read) by a man who spent years studying and living with them. You’ll get insight into how Raven lives with its fellows, and how incredibly intelligent it is.