Is It Ever Okay To Ask If (Or When) Someone Will Die? 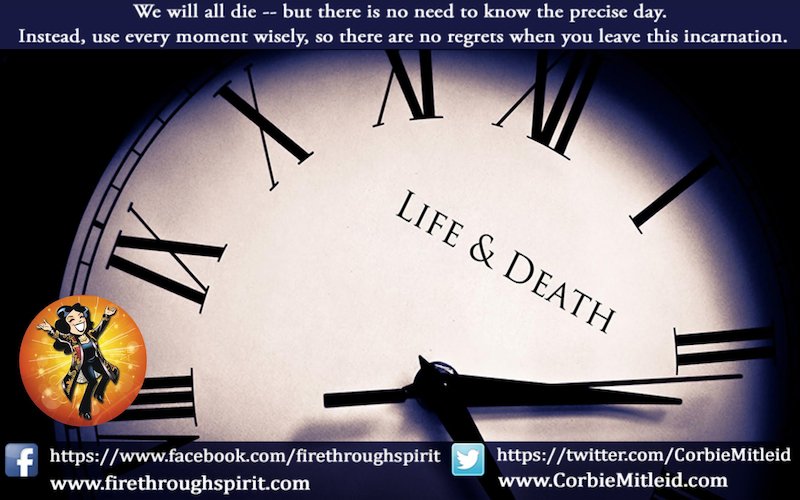 Is It Ever Okay To Ask If (Or When) Someone Will Die?

Recently I attended an expo in London, Ontario. The first day I was there I had a reading done by a psychic from Ontario. My former medium had retired and I always asked her about “family gatherings.” It was understood that family gatherings were funerals but I was never told who, what, where or when — just that there would be none, one, two, etc. within the next two years, and not necessarily family. This Ontario psychic, however, was very specific about my mother and mother-in-law.

When I returned the next day to have a reading with you, I mentioned this and you were upset; it apparently circumvents the legalities of the expos and local laws. My question is: I can understand this in a public expo but in a private reading can I be told, if I ask, about “family gatherings” in general?

Debbie, this is one of the trickiest areas of psychic reading that I can think of.

First and foremost: yes, in some places it is illegal to predict a death, even indirectly. Philadelphia, Pennsylvania has a 50-year-old ordinance saying it is illegal to “tell fortunes, predict a death or offer to cure a curse for money.” A couple of summers ago, someone in the Philadelphia Police Department dug up this dusty and outdated law and within a few days there was a sweep of every reader, teacher and metaphysical store in the city. The offenders were told that if they were caught doing business after the warning they received that day, they’d be thrown in jail. Every one of them. Yes, that was a bigoted, threatening show of force by the police squad “just because they could do it” and the law (or at least the upholding of it) was overturned by the courts a few days later. But the threat is still on the books, and it’s not the only place where intuitives can be harassed and arrested for little or no reason.

So that’s the legal question. But what about places where it’s not technically against the law. Is it proper practice? There are differing views on it, but I’ll give you mine — and yes, it’s a very strong opinion.

When we plan our lives in our prebirth planning session, we plan on several different “exit strategies.” Our Higher Self sets things up so that we have multiple exit points from which to choose during our sojourn on Earth. As an example, one person’s life may have four possible exits built in: dying at 6 from an uncontrolled high fever, dying at age 27 from brain cancer, dying at 43 from falling out a window, or dying at 78 from a car accident.

Note that there is no guarantee that any one of these particular exit points is inevitable (except for the last one, if the Higher Self has determined that a 78 year lifespan is “enough” for this incarnation). But thoughts are things. If a psychic (especially one you trust) tells you that they see your mother dying, if you’re like most people, you’ll dwell on it. If your mother gets sick, or has an accident, you will literally be waiting for her to die, because that’s one someone “saw.” And if your mother finds out what the psychic “saw” (and no matter how careful you are, someone is likely to spill the beans) that can drastically change her own outlook on her recovery, on how everyone treats her, on her decisions about her medical protocol — it affects everything, right down the line. And it might be enough to send your mom out of that exit door, when it didn’t really have to happen.

At the beginning of my full time career, a psychic at a show I did in Liverpool NY sat with a man who had had half his jaw removed from cancer. His wife sat with him because he could no longer speak. The psychic threw down some cards, looked at them, looked at the man’s wife and callously said, “Seven months. That’s all you have.” How horrible! It took me, my mediumship teacher and the promoter of the fair a full evening to do “damage control.”

Same thing with disease reports. A week before my wedding, I was introduced to a high-profile, well-known psychic who is on the same “show circuit” as I am. He shook my hand and immediately intoned, “Ohhh… stomach cancer, within two years, and you’ll have a terrible time getting rid of it.”

That was a double-barreled mistake: it put in my mind a disease I’d never contemplated having. It came from someone who has an international reputation, has read celebrities — the whole bit. And I didn’t need that unsolicited advice days before getting married!

As we’ve all seen, he was wrong. Still, it shook me up for some time until I got it dismissed from my own consciousness. And I’m a psychic, who knows all about change-your-thoughts-change-your-destiny. What about people who don’t know how to deal with such frightening predictions? Doom-and-gloom prophecies, dreadful curses — they all work the same way. If you believe them, if you let them get under your skin, you’ve done all the work for the one who said such things to you, and disaster almost always results.

Now, you’ve said that you would only want to know about deaths in general, not specific ones. Ask yourself honestly: What payoff do you get for even asking such a question and walking around with such knowledge? I would tell you only this: there is no true need to know. We will all die. Eventually, every one of your family members will be the star of a “family gathering.” Use every day wisely. Make sure that every time you spend timed with someone you love, everything gets said, so that there are no regrets. Get wills written, funerals planned, vacations taken, pictures snapped — LIVE! Live like tomorrow is your personal “family gathering day.” And when transitions come, as they will, it will be at the perfect time. You may grieve for and miss those who have gone on — but you won’t have wasted a single moment anticipating the event.

Have a question about metaphysics, spirituality or how it all works?  Send it to us at ASK CORBIE!