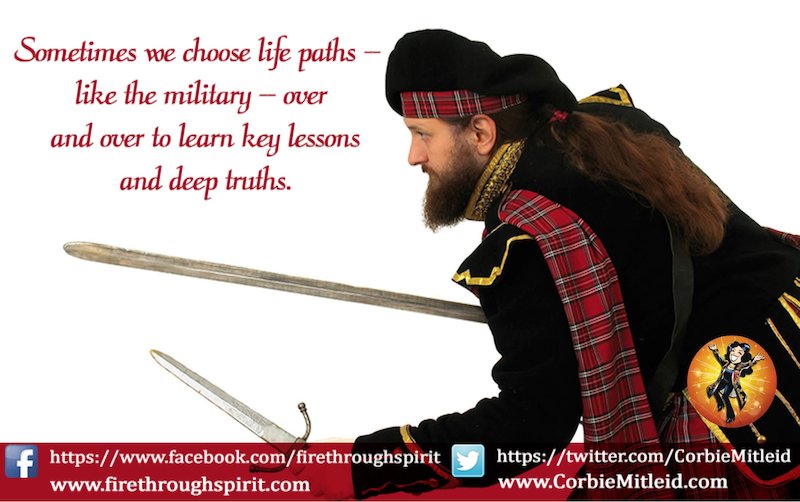 Sometimes we choose a particular life-path – the military, the church, the arts, the sciences – over and over to learn specific things and key into deep truths. This month I highlight an example of one of these “deep studies.”

Kurt, soldiering has been seen as an honorable path by you in many lifetimes. You prefer a life that has clear-cut right-and-wrong modalities. You are the type that feels “Greater love hath no man than this, that a man lay down his life for his friends.” And you have done that countless times.

What literally blows up in your face is the horror that there are more who kill and maim with joy, take advantage of their fellow soldier, and claim a victory over the pain and maiming of their comrades or public innocents.

I have been given soldiering lives by your Guides to explore the questions you posed for this reading. Please understand that you have had many other lives that have not been part of the military as well.

There are also some strong feelings regarding other races – either passionately defending them or fury with them for not defending themselves, depending on the life.

Crusades, 11th-12th century. Key lifetime. You were a very pious German man who chose to ride with his liege lord in the First Crusade. But even before you reached the Holy Land you were expected to go “on crusade” against the Jews in Europe, ostensibly to convert them but really to steal their money and goods to finance the Crusades. This was not according to Church doctrine, but according to what your lord wanted. The army swept into a German town with a strong Jewish population. Your lord wanted the Jews stripped of their money and “converted by the sword,” though he actually didn’t care if they converted or not – if they were dead, their goods could be taken. There were fanatical clergy along with your army.

You had just become engaged yourself, and felt particularly disturbed at killing young mothers, pregnant women and children. There was a group of about seven or eight of your comrades who found these targets particularly appealing. At one point they had cornered a mother and her two children in an alley. When you attempted to turn the men (not because you felt anything for Jews but more the idea of killing women and children) you were shoved aside. You watched as they slit open the woman’s belly and chopped up the unborn child. The elder child (a boy) was then beheaded with a single slice by one soldier, who tossed the head to the others; they began treating it as if it was a ball. When the other child, a girl of about four, tried to get away, one of the men deliberately kicked her in the head as she rushed by; she fell and was trampled.

You literally ran around the corner to vomit. These men disgusted you.   You sought to take revenge on them over the weeks and months that followed, and you succeeded in small, undetected ways, but what they had done was immensely popular, and you couldn’t outright attack or accuse them. To take them down became an obsession.

When your lord returned home in disgrace, your group joined with another band and left for Jerusalem. At the final embarkation of your troops for the Holy Land, you decided you would handle things “at sea.” One by one you killed these men under cover of night and tossed their bodies overboard. Because the crossing was rough, it was assumed that they merely fell over the railing.

You fought well in the Crusades, but caught fever from a wound sustained during one of the battles. You died in delirium, screaming because you believed you saw the ghosts of those you’d killed, bloated and covered with seaweed, half-eaten by the sea creatures, coming to take your soul as you died.

This life set your determination to examine the “rights and wrongs” of waging war, for compassion and cruelty, of courage and cowardice. While the truth is there is no need for killing, it is part of the human experience.

Wars of the Roses – Yorkist side. Late 15th century. Your father had been a retainer to King Edward IV, and you had “paged” with the young Duke of Gloucestre, later Richard III. As you grew older, you were taken on by Sir William Stanley. Somewhat naïve and idealistic, you were very fiercely loyal to King Richard.

Unbeknownst to you, the Stanleys had been communicating with Henry Tudor and really had no intention of supporting Richard at all. At the Battle of Bosworth, you were desperate to get into battle, but the Stanleys held back their forces, waiting to see who would be the probable victor and come in on that side. Eventually they came into battle on Henry’s side.   You later found out that they had been plotting against Richard the entire time. You left his service, and found your way as an ironmonger. You married and had two sons.

Still heart-loyal to King Richard, you were part of the uprising supporting Perkin Warbeck, pretender to the throne. In your mind, rightful king and country superseded even your loyalty to your wife and children. Betrayed by Henry’s spies planted among the Pretender’s supporters, you were captured by King Henry’s men in 1495 when Warbeck first tried to land in England and executed by hanging on the field.

16th century Russia (time: Ivan IV): Here, you were actually one of those who opposed those responsible for the torture and murder of Ivan’s enemies. This crew was not very different from the SS or the KGB in modern times.   You were a highly paid mercenary who would spirit away the first-born sons of the nobles who were targeted by these secret police and keep them safe until they could reclaim their titles and lands. There was no idea when this would be, but you worked to instill in them a love of “Mother Russia” and to stay calm and cool under difficult conditions.

Few of them ever were able to regain their old lives, but for the most part were able to create new lives for themselves with the family gold and jewels they were able to take into exile with them. There became a quiet, somewhat humorous network of “brat’ev v Damaske” (brothers of the damask), acknowledging their formerly noble antecedents.

This life is notable as an example of when you were able to stand up for what you believed without bloodshed of the innocent, yet maintaining the iron discipline of a lifetime soldier with precious lives to protect.

Civil War – Union side, 1860s America. You were a Union soldier from Ohio under the ultimate command of General Davis, a notoriously cold and calculating man who saw nothing as “betrayal” if it advanced his cause. There were many black noncombatants travelling with this part of the army. Your mother had been a strong Abolitionist and was part of the Underground Railroad; you supported the Emancipation Proclamation with all your heart. You went out of your way to make sure that those under your jurisdiction were fed reasonably well and treated kindly. There were even black children in the camp followers; if you had a bit of sweets you would surreptitiously hand it out to whichever child was nearest – you therefore had a quiet reputation among the blacks and they watched out for you as well as they could. Your uniform was always in good repair, your weaponry well cared for.

Davis was part of Sherman’s Army during the “March to the Sea.” At one point a pontoon bridge needed to be built to cross a river when you were being chased by a Confederate brigade. Davis got his men across but destroyed the bridge before the blacks could cross. You were at the back of the troops, and were horrified to see literally hundreds of blacks screaming in fear when they realized they were being abandoned by the white soldiers to the “mercy” of the Confederates. You tried to get your immediate officer to stop his part in the blowing up of the bridge, but he shoved you aside, telling you to “get your mind on the real work – a few niggers more or less don’t matter.” The best you could do was save the one little boy who had been the quickest and brightest among the swarm of kids who waited for sweets. You kept his face turned away as all the other blacks were either drowned, killed, or captured and returned to slavery — including his whole family. He became your go-to fellow and dogsbody, and after the War you kept him with you, taught him to read and write, and made sure he had a trade to support him. You allowed him to take your last name. You went out of your way to support black families during Reconstruction.

Battle of St. Mihiel, World War I, 1918: You were part of the AEF, part of one of the Aero Squadrons. You enlisted believing that the “Hun had to be stopped” but truth to tell, you were rather soft-hearted and not really fit for battle. Therefore, you became one of the observers who flew in a two-seater. You were shot down over the battlefield and ended up with a badly broken leg. You crawled into a foxhole to escape the shelling only to find yourself with a couple of badly mangled German corpses for company. You spent three days in the foxhole until you were rescued by the Ambulance Corps. But during that time, you were driven mad by the constant shelling, the dirt and debris that kept threatening to bury you alive, watching rats and worms and maggots crawl over the bodies of the Germans, and fearing the maggots digging into your own wounds. You were sent back to the States with an amputated leg and a permanent case of the shakes. You drank yourself into oblivion on bootleg booze to dull the memories, though you became such a drunkard you had the DTs during the day and kept seeing the German corpses everywhere you went – standing reading a newspaper, playing poker, driving a milk truck, pitching hay to cows. You eventually shot yourself to stop the nightmares.