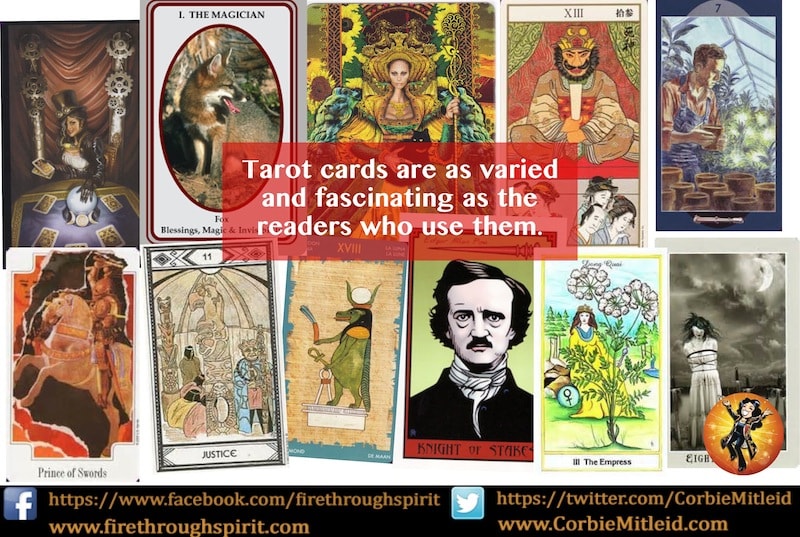 Part of Spiritual Awakening is learning to use and trust our intuition – that “knowing” that we can’t explain, because it doesn’t come from logic, but rather that gut feeling we can get without actual effort. And one of the best ways to learn about that intuition is using cards for divination practice.

Over in our Oracle Cards section, I talk about the divination decks in my tool kit, explaining how they are very different from standard Tarot decks. But here I want to talk about how to choose the right Tarot deck, where other factors come into play, because there are “fixed rules” for how Tarot decks are designed and constructed.

To be a Tarot deck, a set of cards must have a major and minor suit. The major suit generally has 22 cards that represent the Major Arcana, or Greater Trumps – I call that the “concentrated Divine energy in the deck.” These 22 cards begin with 0, the Fool, and finish with XXI, The World.

Then, you have four suits, with very definite attributions. In the classic and classically-derived decks, they are Wands (sometimes called Rods), Cups, Pentacles and Swords. In newer decks, they can have a different feel or different name, but they will generally represent and partner with specific elements: Wands are Fire, Cups are Water, Pentacles are Earth and Swords are Air. Some practitioners reverse the Wand and Sword meanings, but I have found that these attributions work best for me. Each suit has ten “pip” cards (ace through 10) and four court cards (Page/Princess, Knight/Prince, Queen and King).

So those are the basic-basic things that a Tarot deck has. Now, of course, comes the complicated, delicious, roller-coaster-adventure part: choosing your own deck.

Take a moment to think about what really draws you to something. Is it the feel? The look? How you interpret what you see? All of these things are important when it comes to choosing the right Tarot deck.

It should be comfortable in your hands, because that is where it is going to live for a long time. Decks come in different sizes, from mini versions to massive. My personal preference is for a deck that is larger than a standard deck of playing cards, because I like the deck to be clear enough to point out diverse elements to my clients as allegorical teaching tools.

The artwork will be key for most of us. A deck can be pale or brightly hued; it can be full of action and figures or simple and clean-lined. It can be realistic or abstract, created with painting or collage work or photographs. It can have animals or people or trees – or aliens! And one is not necessarily better than the other, except for one thing: the best Tarot deck for you will be one that the artwork begs you to fall into, because you will love spending hours on single cards, finding the layers of nuance and meaning in each one. And the more you study your deck, the more it will partner with you for your esoteric work.

I’m going to look at six different deck styles in this article, from the absolutely traditional and well-known Rider-Waite deck, to some of the more modern interpretations. As you read through, you will start to have a “feel” for what calls you as your deck.

RIDER-WAITE: This deck has become the archetypal deck for the modern reader. Created in 1909 by A. E. Waite and Pamela Coleman Smith and now sometimes called the Rider-Waite-Smith deck, it tends to be where many of us start. The meanings given to the images and cards are standard and clear cut, and many general Tarot books teach with their meanings at the forefront of interpretation. There are literally hundreds of versions of this deck: the Radiant Rider-Waite, the Universal Rider-Waite and the Illuminated Tarot, just to name three. If you are first setting foot on the Tarot Road, no matter what other deck you get for yourself, I recommend you get one of these archetypal decks, so that you can go image-for-image with the general teaching books as you learn.

But once you get the Rider-Waite structure under your belt, where can you go?  Here are five variations:

NATURE BASED: Nature based decks are just that – rather than based on mankind and civilizations, they use flowers, trees, weather and animals. While most nature decks do tend to be oracle cards rather than standard Tarot, there are a couple of notable exceptions:

The last two styles are rarer in the Tarot pantheon, but I’ve found a good example of each one that will be both beautiful and useful in your collection.

COLLAGE DECKS: College decks are just that – pictures and creations put together from several different sources. A good example:

PHOTOGRAPHIC DECKS: Photographic decks are primarily photos, rather than drawn art, but can be wonderfully evocative. A good example:

So there you have it.  Tarot decks can be as varied as Oracle decks in style, mood, and flavor.  It’s why so many of us have wide-ranging collections.  But no matter what style of deck you pick, if it’s the right one for you, it will leave you down gorgeous pathways of mystery and knowledge.