Corbie’s Wayback Machine: Trying To Save People No Matter What 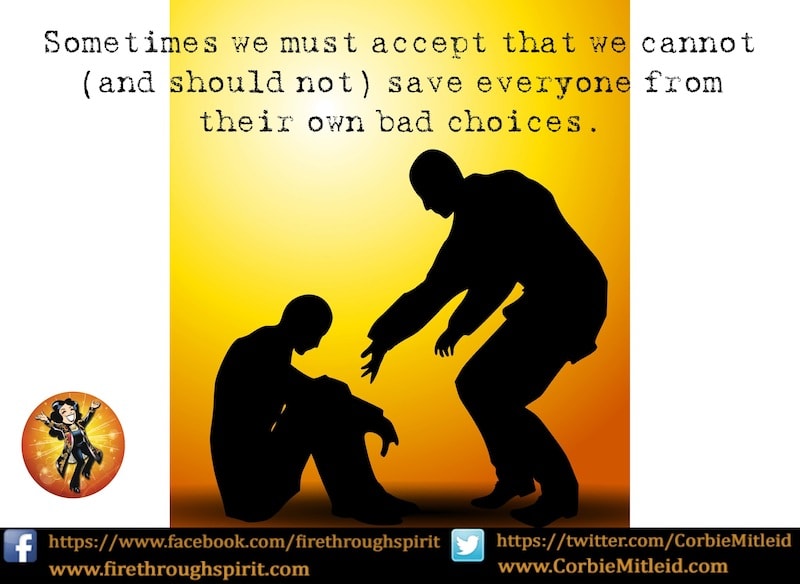 Corbie’s Wayback Machine: Trying To Save What Cannot Be Saved

I am the oldest child and I think I was everything my parents wanted. But as soon as my middle brother, Ricky, was born, my mother became depressed and resentful, and my father distanced himself. My parents are very narcissistic and growing up my mother spied on me, was passive aggressive, and was really inappropriate around my sexuality, even though I was always reminded that my only function was to be beautiful.

I finally put my foot down and refused to tolerate being called a “blonde bimbo” by my father, and now my whole family says I’m the bad daughter and won’t have anything to do with me since I’m not playing the game any more.

Ricky committed suicide, which sent my family into even more of a dysfunctional state. Maintaining healthy boundaries with them is challenging. I feel stuck in anger and confusion most of the time.

I need help on increasing my ability to feel emotionally safe with my partner Harold (we’re getting married in a few months), how to best navigate my relationship with my family, boundaries, clarifying my responsibilities to them, and what might bring me peace and assistance in shifting my reactivity into acceptance and love.

Queenie, the sense I get for you is that this is about emotional independence, but at a more intense level than I usually see. This is also about freedom: self-esteem, self-confidence, flying on your own.

The overall feeling I get with your parents is that you have tried, lifetime after lifetime, to save them, especially from themselves — and your dogged determination, however well-meaning, ended up destroying all of you.

The two most recent examples (interestingly, both in New York City) of how trying to save those who will not be saved cost you your life:

1911 New York: The Triangle Shirtwaist Fire: You and your current family were all sisters who worked at the company. Your current mother was the one who believed she should be an opera star because of her beautiful voice. The family life was very much all about her. When the fire broke out, you would have been able to lead them out of the fire, but one (your father this time) dithered and held everyone back; you refused to leave anyone behind. By the time you pried him (her) away from the worktables, it as too late to leave up the stairway to the roof. You crowded onto the flimsy fire escape instead, which collapsed, throwing you all to the ground to your deaths.

1951 New York: Your mother was a heroin addict (Louise), your father the pusher that supplied her. In this life, you were male, a Jazz musician (I am seeing saxophone) who was married to the heroin addict. You saw what drugs had done to many of the men and women of your generation, and even though Jazz was frowned upon by the Baptist community you grew up in, you figured that the music was “less sinful” than the drugs. You had fallen in love with Louise back in high school, where you were still a good kid but she was on the wild side. Still, you both fell in love and got married, and when you moved from Baltimore to Harlem to play Jazz, she came with you. You tried everything you could do to get her off the drugs, and she made promises she kept breaking. Still, you loved her too much to let her go. One day she came to you and told you how terrified she was that the pusher was out to kill her — she owed too much money and if she didn’t come up with it she would have to let him pimp her out as a prostitute. You couldn’t stand the thought of that, so you agreed to help the pusher knock off a liquor store to get the money he was owed. The job went bad, you were all discovered and all gunned down by the police.

It is no surprise that you and Harold found each other this lifetime. There are two previous lives where you are involved with each other:

1850s-1860s Alabama. You were a quadroon house slave that became Harold’s mistress. You were exceptionally intelligent and had been taught to read and write by Harold’s wife in order to help with the household books. The wife died in childbirth and you helped rear their daughter. It was very much the kind of relationship that was “hidden in plain sight.” The War intervened. Harold was too old to fight, and had lost a leg in a farming accident. Through your patient explanations, and his dreams of vengeful angels, he finally realized that slavery was “wrong to the soul,” and the two of you became part of the Underground Railroad. When it was your time to go, he allowed you to leave, even though he knew it would “mean that I follow you on angel wings not long after.” You made it to Canada; he died within a month of your leaving. You married there, and named your first freeborn child after him.

18th century New England: You and Harold were long time neighbors, both intellectuals that would later be termed “Boston Brahmin types.” You married locally, while he moved to Philadelphia. Your husband was less enlightened in terms of women’s intelligence and education, and so you kept up a thirty-year correspondence with your friend (who also married elsewhere), discussing religion, philosophy, art, and social values. The correspondence stopped when the Revolutionary War broke out. You were firmly on the side of the Patriots, while Harold was more moderate and believed somehow that matters could be settled with England. He had to flee the country as an expatriate Tory. You heard from him twice more in your life, the last being a small bequest when he died in England: a number of his philosophy books, with the note “May these worthy Gentlemen bring you much Consolation and a View through another Window, which I to my Sorrow was unable to do in our last Correspondence.”