Dumping Out the Hope Chest 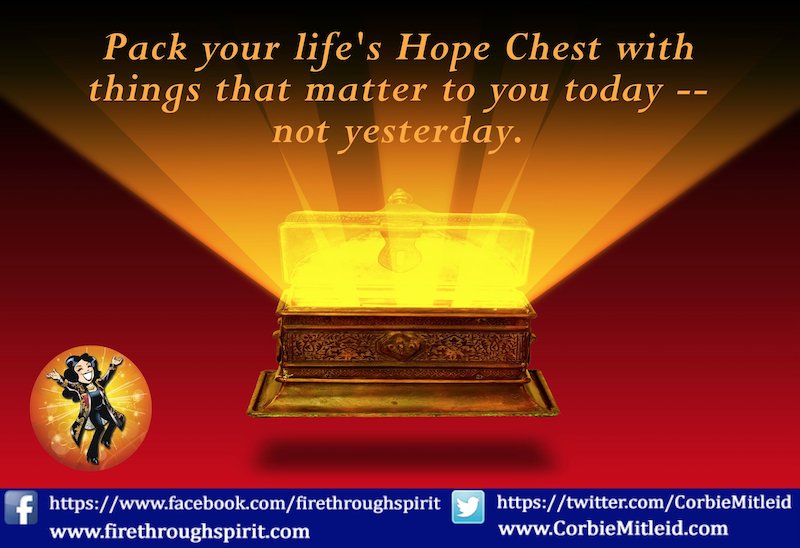 Dumping Out The Hope Chest

Facebook, as I’ve said recently, can be a very useful thing. But it can also be a smack in the head when you least expect it.

Catching up with some friends’ posts this morning, I noticed that after many of them I had that twinge of “Damn, I was going to do that too” – and began either berating myself for not doing it, seeing where I could stick it into my schedule, or bemoaning the fact that I’m too old for some of it to ever take root.

Suddenly, I got the image of a hope chest that is so full to overflowing that you can’t shut the lid. Stuff is getting squashed. Torn. Mildewed because it never saw the light of day. The box itself is popping hinges, getting damaged.

And all because someone can’t see that some things don’t belong there anymore, they are avoiding dumping out the hope chest.

Look, the fact is I’m an Elder now. And not all the dreams and hopes and almost-unattainables-but-anyway that I’ve piled on myself over the years are going to happen. Some of them are simply physically and chronologically impossible. Some aren’t even important anymore, but there they are at the bottom of the hope chest. Things like:

…reigning as Queen of the East again in my old Renaissance re-enactment group. …becoming fluent in German and then touring Germany and the Western Front to see all the places I’ve read about, and perhaps remember. …writing my World War One novel. …being famous by fifty, rich enough to own a big house and never worry about money ever again. …being someone my family would understand, and be proud of. …staying thin, sexy and gorgeous no matter how old I am.

If you look at these carefully, you’ll see that for the most part, all of these hopes were so that others would think well of me, would like me. And all of it comes down to “so I can point to my life and say I did it all and people will think I was worth something.” Those reasons never, ever work, and will never, ever satisfy you.

SUCH a good reason for dumping out the hope chest – “that’s not me anymore.”

There is not one single thing on that list that I will ever accomplish, whether it’s because of where I am on my liferoad, where my interests have turned, or what has happened to my body with all the cancer dancing I’ve done. I can’t make others like me, understand me, or value me.

…finding peace in my heart and soul. …releasing old hurts and feelings of failure. …transmuting my fears. …meditating deeply and for longer periods, and allowing myself time for it. …reacquainting myself with my body now. …writing articles that move me, which I want to share. …teaching those who want to listen. …staying viable into my eighties and nineties, whatever that looks like.

And it all come down, really, to one thing: believing in myself a little more each day.

That’s still a pretty full hope chest. But many of them work together, supporting each other. They are all still attainable, right up to the day of my death.

These are the things I want to do, to be, to leave behind me now. And isn’t that what a hope chest is about in the first place?