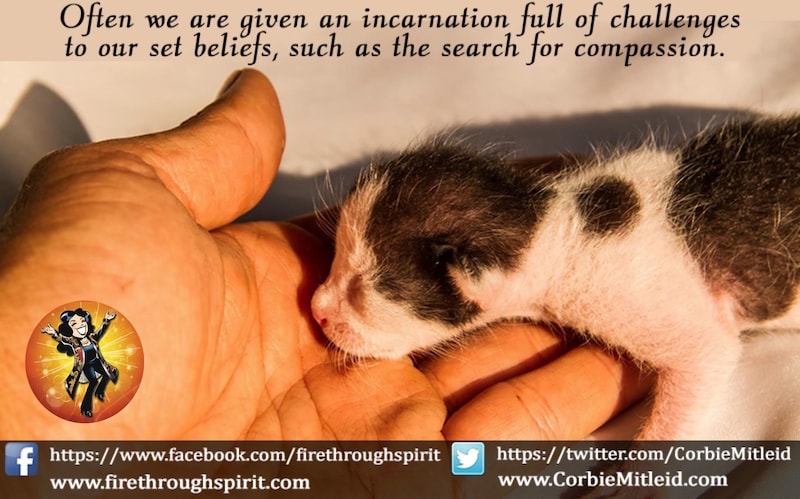 In this past life retrieval session, I worked with someone that had a great deal of difficulty in relationships. “Myron” tended toward extreme behaviors, with huge anger issues beginning with an abusive relationship with his foster parents.   He came to me because he was having a terrible time dealing with his partner, “Sidney.” He also had a difficult time dealing with anyone around him who was “lesser than” in terms of handicaps, mental capacity or emotional understanding.  This is a partnership with many Karmic lessons to deal with: lack of commitment, lack of self-belief, the need to learn emotional independence, and learning to be of compassionate service.

The first life I saw was in Rome in the 3d century. Myron served in Emperor Constantine’s household.   Sidney was a daughter of one of the nobles and was brought up with the emperor’s daughters. Myron was assigned to them as a tutor. He was actually a partial eunuch – could still function sexually (rare but not unheard of).   Sidney was infatuated with Myron. Myron, knowing that to curry favor was to rise, encouraged it in subtle ways. Sidney was set to marry someone much older (and cruder) than she was and was extremely upset. Myron, in comforting her, went too far, and there was sexual contact. Myron told her that because he was a eunuch, no one would know, and she, being naïve, believed him.

When she was found not to be virgin on her marriage bed, the contract was denounced and invalidated. Sidney expected Myron to claim her, but he never said a word. She tried accusing him, but of course everyone knew he was a eunuch, and so she was deemed a liar as well as a whore. He retained his supremacy; she was cast out and disowned, and ended up among the poor and nameless of the Empire.

This started a back and forth over many lives with the two of you trying to find a relationship that would work through trial where honesty was valued over expediency.

This also set up lives of “extremism” in terms of male/female for Myron to understand them from a clearer standpoint.

The second life I see was in Azerbaijan in the 12th century. This life brought peace. In a sense, it was a rest-and-relax life, in that how people felt did not particularly bother Myron. He was male, but joy was in female-thought domestic things – he took in stray children the way some people took in stray dogs. He had a large (for the time) rambling farm, so he could fed the children, dress them, teach them work, and give them the knowledge that they were worthy beings. He was considered a pushover for his kindness, but just shrugged and laughed. The only time he would lose his temper is when he saw one of the children taking advantage of or bullying another.

The strength of the 12th century life plays directly into the foster life this time. The hope/plan was that the remembrance of what a good foster parent would be like would give him the strength to see beyond his current foster parents’ anger and perhaps turn it around for them, but their “stuff” was more than he could process in this life.

The third life was in India in the 15th century during Sayyid Dynasty. Myron’s Father (the foster father in this life) was a merchant in rugs and textiles. Myron grew up learning the business. Father was a ‘practical Muslim,’ and believed that Allah would expect you to take care of family first and get to Him later. “God willing, you will make the Hajj, but you have many years before you. I do not.” The father went on Hajj and (deliberately) never returned, as he was heartily sick of his wife and responsibilities.   He felt he had done his duty, and now his son would provide.

Myron was left with a mother (his foster mother this time) and six sisters and brothers to rear. Took over the father’s business. Mother kept insisting that he didn’t do it as well as his father, Allah rest his soul. Mother was madly in love with father, blamed Myron for the death because “if you hadn’t been so willing to take over and puff yourself up, your father never would have left” – completely misunderstanding why Myron was willing to go along with his father’s wishes. Every time MYyron wanted to turn over the business to a brother so he could go on the Hajj, something happened – the brother got sick or injured, or a marriage was immediately contracted, or the roads were too perilous. Myron wanted to marry, but his mother was so ferocious that he was unable to contract a marriage with a girl “good enough to carry your name.” The true story was that she did not want another woman with influence possibly breaking her hold on him.

The father set up a circuit where he would want to get Myron back but would not be permitted to, since he left with no intention of returning that time, leaving Myron holding the bag.

The foster mother needed to have Myron yet let go, as was done this time. Karma here has achieved balance.

The next life was in 18th century England, and was a life with Myron’s biological brother Abe. They ran a printing shop together. His brother forged documents, printed illegal broadsides, and generally didn’t care what he had to do to make money, and he spent it on women and drink. Myron was younger, simpler, and more good-hearted, but because he was so simple women would take advantage of his good nature and his brother would steal away any woman he took a fancy to, just because Myron liked her. Myron then figured out that the only woman his brother wouldn’t want was an ugly one, so he found one with a wall eye and a club foot who had been burned in an accident as a child (her father, Sidney, a silversmith, accidentally knocked over a casting pot with her nearby). She was just grateful to find a man who didn’t spit at her at first, but when she saw that Myron didn’t have ambition to raise their station, she belittled him and constantly compared him to his brother. While his brother did not want to bed her, he would use her as a goad to get his brother to do things he wanted, yet pretended to sympathize with Myron.   Over the years, Myron’s good nature soured but he did not know how to channel his anger effectively. Eventually, Myron found both wife and brother together one night, roaring drunk, plotting and mocking him mercilessly thinking he was not yet home. Myron snapped, raging at his brother with a red-hot poker and killing him. When his wife tried to run out of the house screaming, he killed her too. He set the house ablaze and left.

Karma required Myron to balance the death of his current foster mother and brother, explaining the battered child syndrome and inability to trust his brother.

The last life I was given was in Libya, in 1942: Myron was a ittle street urchin in Afrika during WW 2. In this life a female, Myron knew enough to cut her hair short and call herself “Amir” instead of “Amira.”   Pet of the Afrikakorps soldiers, she was able to beg, borrow, steal, bargain or cadge everything she needed to survive. She actually ended up becoming a camp “errand boy” for the chaplain attached to the Korps. When he found out, by accident, that she was actually female, he passed her off to a local tribe of Tuareg for care but she ran away at her first opportunity. As the tide turned, she turned her attention toward the winning British, but by this time it was becoming hard to pass herself off as a boy, and the British were not as easygoing as the Germans had been; they would have nothing to do with her, with the exception of trying to get her to have sex.   One man went too far, and she slashed him in the face; after that, she knew that she was considered an enemy and stayed away from the army base. She ended up staying in Tobruk, where she was regarded as something cursed, neither man nor woman because of her “unnatural” ways.   She regarded sex as something that would lose her power, not gain it, and began specializing in herbs and medicines that would prevent pregnancy and abort children on the one hand, and suppress testosterone on the other hand for those men who wanted a semblance of the life she did not.  She died before she was thirty, never loving or committing to anyone.

This life requires Myron to have a deeper understanding of (and compassion for) men and women who are not in stereotypical gender roles.

IIf you are interested in discovering how Past Lives are affecting your current life challenges, please click on our BOOK A READING button and choose a Soul Plan Reading.