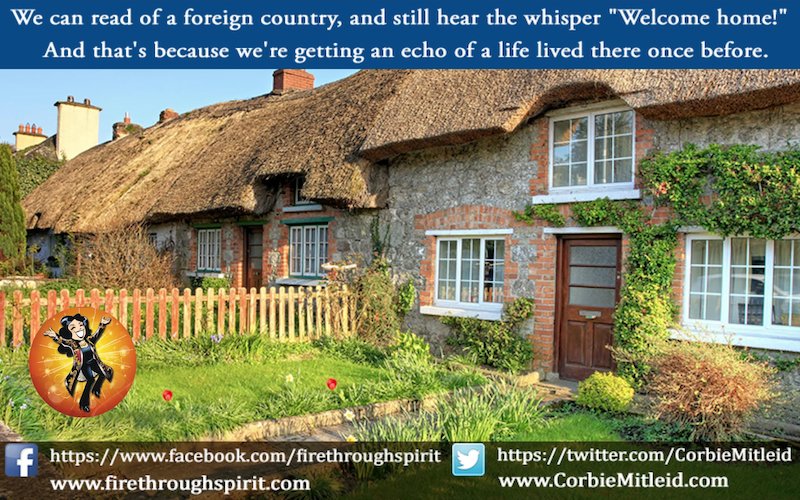 Sometimes when I visit places I hear in my head “you’ve come back home.”  It happened when I visited Britain on a tour of sacred sites, and again in the Peruvian Amazon.  And when I read Dickens I feel like I’m reading about my neighborhood!  Why do I hear this and what do I need to know about these lives?

19th century London:  You were one of the upper middle class/lower wealthy whose life choices were moved specifically by Dickens’ stories. Your family was originally from Ireland (County Wicklow) and moved to England in the 1790s (British who had been granted land years before, and who were discomfited by Catholic neighbors and the beginnings of uprisings). You had both a house in London (Bloomsbury area?) and a country house in Oxfordshire.   Your mother was quite sickly, having barely survived dysentery just after bearing your sister, who died of it. As a result, you were fastidious about cleanliness. You became a physician rather than enter family businesses of small-house banking and publishing and you were fascinated by the new discoveries regarding health, disease and prevention.

Your wife was the one who in this day and age we’d call a “bleeding heart liberal,” breathlessly reading everything Dickens wrote and pushing you towards reforming London’s horrific “stink” of sewage, rot and filth that crept up into even the tonier levels of the city. You were less moved by the fictional pictures of the poor than what you saw as the guarantee of the demise of London in an epidemic if something wasn’t done. You worked with Henry Mayhew, whom you knew through the family publishing connections, and Edwin Chadwick.

You met Dickens once, at a social occasion and were, quirt frankly, shocked that he had nothing of the overly dramatic or ego about him. He genuinely cared about those conditions of which he wrote. He was also very wise in the ways of humanity, and saw at once that you were part of reform for the scientific, rather than the humanistic, side of things. He offered to take you with him on a short ‘bumble about’ as he put it, wanting to show you things close up, rather than let you stay away from the coarse reality. Sure enough, what you saw shook you so badly that instead of an academic exercise, it became a fierce heart-passion of yours, which equipped you to help in the cholera epidemics in the mid-century and get the new London sewer system up and running.

Cornwall in the Middle Ages:  For the sacred sites, I was told Cornwall is your “heart home.” The first place I picked up was Cornwall, by the sea, near Michael’s Mount. You were a younger son who had been gifted to the church when you were clearly not interested in farming, hunting or chasing the girls the way your brothers were. You became Benedictine and tutored the young men of the house in rudimentary Latin and religion. You were a chaplain attached to the local castle, and did your best to tread the delicate line between championing the Christian faith and surreptitiously allowing the pagan rites of the people to flourish where the master of the demesne did not see.

You did have a habit of wandering after dark down by the shore. Most people would find it unsafe, but you seemed to feel that it was “where the angels were closest.” It was there one night that you spied two men struggling with a young girl, clearly intent on raping her. You sprang up, screaming and throwing rocks. They did not expect anyone there, so they dropped her and ran. As you came up to the girl to see if she was all right, you were thunderstruck. She was naked and, to you, too beautiful to be human in your eyes. You literally fell to the ground, huddled, covering your eyes and fumbling for your rosary.

When you looked up a few minutes later, she was gone. You saw the girl that had originally been there, fainted behind a screen of rocks. And next to you was one of the stones you threw – or so you thought. It was red, oval shaped, and had grooves in it that you found perfectly fit your fingers. You heard in your mind “even the smallest of weapons can defend the greatest.” You picked it up and carried it back with you, keeping it hidden for many months until you figured out who – and what – it was all about. The girl had called for help to St. Mary Magdalene, who had changed places with her; you had been the saint’s chosen weapon of defense. The stone, looking like the red egg of resurrection she often held in paintings, was her gift to you.

Another life, near Tintagel, found you as  a young boy, mute, who herded sheep, goats and cows. You heard things others did not, and it was said that the Faery gifted you with Faery ears because you would not be able to divulge their secrets. You knew when the weather would change, you knew when stranger would come to the village, but you only told one family who believed in the Old Ways and would not report you to the village priest. You lived within sight of the castle, but did not go there; the stories they told were false ones, you thought, and the Fae did not like it there. “Too much Cold Iron,” is what they told you. You never lost an animal, and while others would lose them to predators, cold or wandering off a cliff, it was as if you knew where they were at all times. Once a year you would leave a lamb in the forest for the Faery. You never knew what happened to it each year, but believed it was your gift to them as thanks for protection.

“Go there and listen. Unstop your ears and slow your heart. Do not listen to the claptrap they tell you; most of it is falsehood and fancy to amuse those who come and know nothing. Listen, and we will tell you what you need to know.”

The connection between Cornwall and London for you: late 13th century. A servant in a great lord’s household. The family was formerly priest-class of the Old Religion. Bringing to London a piece of stone from a holy well. There was a meeting with someone from Anglesey, and one from Orkney, each one bringing a piece of stone from a holy relic. The stones were to be crushed and mixed with clay and a new Holy Grail formed for those who still followed pagan ways, but it had to be brought to a place that was the seat of the Christian Kings; water to be taken from one of the holy places (Camberwell?) in the chalice and poured back into the sea at each of the holy districts in order to transfer power back. The chalice was made but the plot was discovered before water could be taken back. The three of you were killed as heretics but not before you cursed “the black heart, the black hand, shall bring the blackest of plagues upon this city, before thy son be upon the throne that thou dost hold in defiance of the Land.” Your corpse was thrown outside the city, but buried by the Well itself. Thus, there is that part of your soul that guards both London and Cornwall.