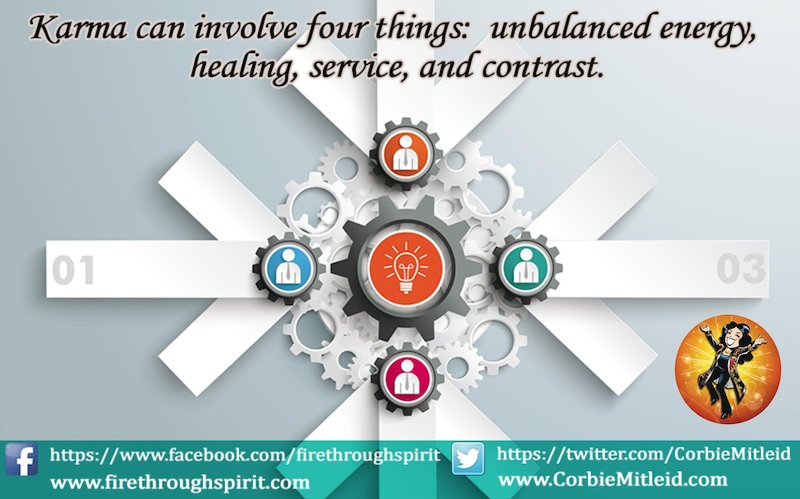 Remember that when we talk about Karma, we don’t necessarily mean “good and bad, reward and punishment.” Karma generally has four things that can be involved: unbalanced energy, which is a neutral; healing; service; and contrast, learning about both sides of a situation. In the case below, we see how Freedom can be a core karmic challenge throughout many lifetimes.

I need to know why I have had such an abusive life. I was always the child that no one paid attention to or wanted to be with. Even though I had three siblings I was always the one left out. When I would try to spend time with my mother, she said that she “didn’t like being badgered for attention” and she would lock me away in my playroom. To punish me (and it was always my fault things happened, never my brothers) she locked me in the basement or in the pantry and this went on until I was about 12. After that it got worse when my mother and father starting drinking. I would get hit, screamed at for hours, and my father who was an alcoholic would always go for his belt

I had to run away from home at 17. Now I’m in my 40s and I’ve never been able to settle down with anyone or keep a job for very long if I don’t think the boss plays fair. How can I change this?

William, the two words I am immediate given for you are “escape artist!”   Freedom has always been a byword for you, in every life, and whether it as fighting to get it or fighting to keep it, you are always a fighter. You don’t do well in “calm lives” and you don’t schedule them often. I have picked up five lives for you that have a direct bearing on your questions regard this incarnation. You have never wanted to be held down by rules, and because you insist on higher intelligence than normal in your incarnations, you were able to use that intellect to wiggle out of just about anything required of you.

The first life I was given for you is in 16th century China. You were male, and you made a living stealing babies. Most of these thefts were from lower-class houses that could do nothing about the theft, or actually didn’t care because the baby was another mouth to feed. How much a baby sold for and to whom you’d sell it depended on what their parents looked like (plain or beautiful), what kind of intelligence you noted in the parents, and how their siblings looked and behaved. The plainer children were sold as slaves, servants or, if female, to bordellos to be used up young and tossed aside. The prettier ones, the ones who boded to think well and have talents, you would auction to families who could not seem to have their own. The boy babies went for the most money, especially to women whose position in their husband’s household was precarious until they presented him with a boy child. There were enough soldiers and long-traveling traders that the little boy business was brisk.

I was then taken to 17th century France. This was during the time of Louis XIV and his many mistresses, with reams and reams of court intrigue. You were a small-time fortune teller who sold potions, including poisons, to the rich. You came by night, always dressed in dark blue, and masked. Anything that added to your mystery, you would add onto your legend. You loved being outside the rules of society and having power over the more gullible and more wealthy ladies and gentlemen who came to you. You were arrested and accused of assisting in a plot to kill a noble woman’s rival for her husband’s affection, as well as her children. In order to escape your own death (which you did not) you implicated your mother (who had taught you everything) regarding her assisting the wealthy with abortions. She was arrested, tortured and killed – but so were you. (This was your mother this time, hence the constant “imprisonment” as a child.)

We move forward to the mid 19th century Europe: you were an absinthe maker, trained in France by Pernod. Absinthe was made by distilling the wormwood plant in alcohol with anise, hyssop, lemon balm, and other herbs, resulting in a very potent drink that had hallucinogenic properties. You moved to Britain where you had a very small but select clientele – wealthy British nobles who did not want to be seen patronizing France (the only place that was supposed to be making Absinthe by this formulation), but who loved the drink itself. To keep them tied to you, rather than to any other supplier, you added bits of opium to the absinthe so that it was even more highly addictive. You were able to stay in business for roughly 15 years until agents of Pernod discovered your illegal business; you took your profits and ran. You ended up owning a small tavern in Cardiff, where you continued to doctor the alcohol to keep your patrons coming back for more. (Thus this time you agreed to be the victim of alcoholics, to do a quick ‘wipe’ of the Karma.)

You are again dealing with the energy of China in the American West during the late 19th century (1880s), but this time you were American. You were an immigration officer who would take huge bribes in order to sneak the women in. You worked with Barbary Coast slave traders They were promised the chance to find husbands or reunite with their loved ones, but instead were generally placed in San Francisco brothels, sold as household drudges, or taken to remote “breeding farms.”   You convinced yourself that getting them into California was better than having them drowned or sent overland through the wilderness in the Pacific Northwest. Still, this was a very lucrative business for you until your own daughter became one of those who fought the Chinese traffic trade and worked to stem the flow of women bound for servitude. In order to keep your business from being known, you had your daughter married to a wealthy Philadelphia scion who had some business in California; they met, you engineered that they should fall in love (by bribing the Philadelphia boy) and sent her East. You died very wealthy and passed the immigration bribery business on to your subordinate, who was very poor at it and was discovered within four years. HE took the fall that rightfully should have been yours.

We end with you in southern California in the 1930s. You were a mother who wanted to be something big – an artist, a writer, an actress. Living on a tiny farm on the outskirts of Hollywood (and yes, that’s how rural it was in those days!), you often saw movie stars riding past your farm in fancy cars, or saw them when you went into the city.   You were never able to realize your dream, however, because you were Catholic and married a man who wanted a big family. You quickly had three of your own and ended up taking care of both your children and your husband’s two children by his late wife. Because he worked very hard on the farm, in his small hardware store on the road into town (really not much more than a shed), and picked up what jobs he could – this was, after all, the Depression – you had virtually no help and no adult company. It was kids, kids, kids 24/7, always demanding, always You went crazy because you were unable to have a moment’s peace. At one point you locked all your children in the coal cellar and just walked away. The kids were found a few days later, very weak from hunger but they survived. You were found in Hollywood about a month later on the streets, begging and living with other homeless people. You refused to come home with him, screaming and hitting him when he came near you. Because your husband was a good Catholic, he never divorced you, but he did not force you to come home, either, because he was afraid for his children.   His sister moved in from San Jose and took care of the household. You died within the year from physical sickness and madness, believing right to the end that you had escaped a much more horrible fate.

What all of these lives are trying to show you is that your Life Challenge this time is to make it on your own, and yet do it within rules and boundaries. You have lived enough lives, have seen both the good and the bad side of things, and have the strength of will and imagination to stand up to the difficulties you’ve faced. Things are likely to change if you move less towards the “exciting” and “energetic” folks (who can often be mercurial in temperament) and more towards the calm, the rational, and the even-tempered. It will take you time to adjust to the difference in energy, but swimming in calm waters instead of riding the rapids, as you have done in so many lives, is more likely to bring you the peace you seek.

IIf you are interested in discovering how Past Lives are affecting your current life challenges, please click on our BOOK A READING button and choose a Soul Plan Reading.