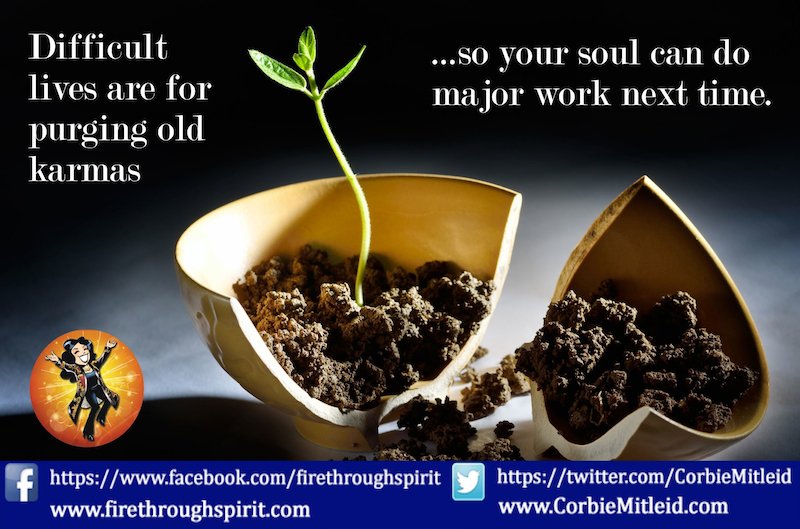 I had an extremely abusive childhood that led me to rebel and use drugs.  I lived an erratic lifestyle and started drinking. I took many risks in my younger years and had some awful experiences.  Then, I  stopped drinking. I went through a painful divorce, lost my only sibling and lost 2 cats I loved dearly and still miss terribly.  I came into this world without an aggressive bone in my body and had to be taught how to stand up for myself. I still detest conflict and try to do anything to avoid it. Lately I’ve had a couple instances of intense fear for some unknown reason, probably past life stuff. There is no rational basis for it that I can figure.

When a life is filled with violence, as yours has been, and a repeating cycle of the same mistakes – physical abuse, drugs, life-threatening situations – it is the signal that a major change, right down to DNA and lifepath level, must be grasped and held. It is also the signal that at some level you are calling these things to you. No one is a victim at that level, at least not in the US where you were able to leave the situations, but chose not to.

What I get is that you are with people who are NOT part of your soul group. This is an “independent study,” if you will. Your parents have not interacted with you before.

I sense that you have too many times fought back yourself, more intent on winning than understanding. You wanted a life where much of this could be dispensed with, without going back to a previous relationship. This is a purging and growth life, wherein you seek to rid yourself of old karmas in order to come in again to do major work.

It is more than emotional independence – “I don’t need you to make me happy.” It is the ability to see above and beyond emotion.

Too often your lives have dealt with black-and-white, good-and-evil, with no room for nuance, compromise or understanding. It is why your soul chose a life that was extreme in its circumstances, so that you would purge yourself of this constant need for extremes. It is “the middle way” that is best for you. In fact, Buddhism is an energy that would anchor you and sustain you from here on.

I have been given two lives that affect you directly this time, wherein you could have made a profound difference in your world. One in London, 1740s. One in South America in the 1800s.

In 18th century England you were a well-known London actress, though your acting skills were not as good as those you had in bed. Your family was strict Calvinist from Scotland, but you could not bear the coldness and cruelty of their version of God, and so you left. It was a dangerous life; you were just good enough on stage to get parts but gin and the power of sexual favors were more fulfilling for you. At one point, a friend of yours who was costumer for the theatre, had a loving husband and child – and who loved you dearly – spent days trying to persuade you to change your life.   You promised you would, and she gave you the money it would take to get yourself a safer place to live and more modest, less hand-me-down clothing. Instead, you made a mockery of her AND her gift of money – you had not intended to change your life at all – and as a result, her wages were cut (“If you’ve money to throw on this slut, you don’t need our shillings”) to the point that she could no longer afford to work there.

Had you taken her gift and changed your life, there was a lover who would have been a husband, you would have had children, and a patron would have assisted you in helping other women who had fallen on hard times. But because you believed that to give up your life as you lived it would mean that you had “lost” the Game, that chance passed you by. Within five years, you had the pox so badly that you could no longer be onstage OR take lovers. You died in squalor.

The 19th century South American life: you had the opportunity to lead your people to peace and prosperity. You grew up poor and saw that the rich were abusing your people, and that there was no justice if there was no money. You led a revolution that overturned the old regime, and were regarded as a hero. At this point, you could have become someone like Mandela, who turned away from the treatment received at his enemies’ hands and showed them forgiveness and forbearance. Instead, you were so emotionally exhausted after years of struggle, it was like drink and drugs to you to be able to condemn wealthy men to poverty, kill and torture those who had killed and tortured your friends, and denounce virtuous women as whores and spies if they did not offer their favors. Within ten years, your revolution fell apart and you were imprisoned, where you died several years later – remorseful, slightly mad, and constantly replaying what happened as if you could change the past by changing your memories.

In both of these lives, control and immediate gratification were chosen rather than a belief that life could get better and you could have had a hand in it.

Not every mistreatment/maltreatment in life has a direct correlation to a particular past life – if we are raped, we ourselves committed rape – if we are robbed, we stole. Sometimes, as with your soul, there is an overwhelming need to experience the pain of the existence, in order to leave ourselves no room to escape the lesson.

The most important key for you in this lifetime is to remain somewhat objective.