Leave Our Wants, Guilts, and Avidity Behind 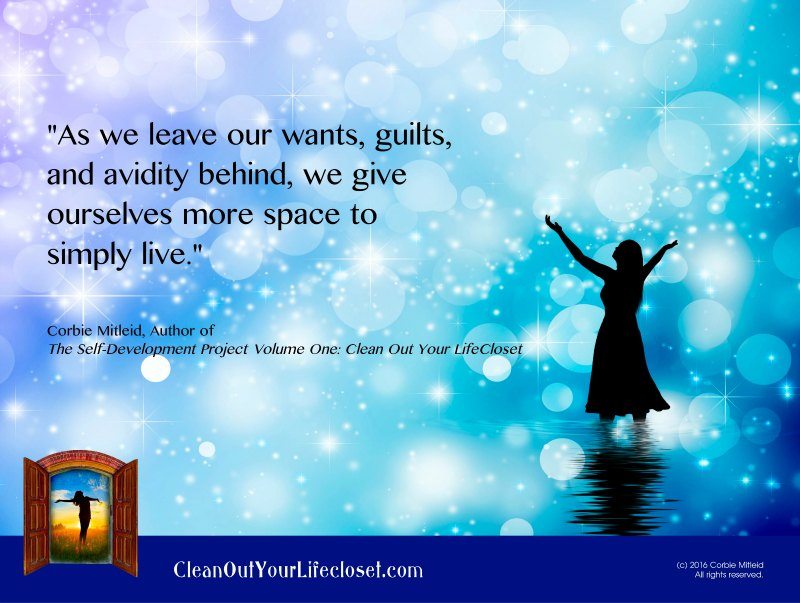 Leave Our Wants, Guilts, and Avidity Behind

My husband and I come from completely different backgrounds. I grew up in oh-so-tony Cherry Hill, NJ, where everyone’s parents were professionals, every household drove expensive cars and had name-brand wardrobes, every family took expensive vacations and every child went to college without batting an eye at the cost. Carle’s life was different: his father was a school principal, surrounded by middle-class and working-class folks.   Money was carefully considered in every instance, and while they never went hungry, there were often times when the rule was “use it up, wear it out, make it do or do without.”

For me, however, money didn’t solve much beyond physical necessities. I grew up full of anxiety, fearful of what other people thought of my clothes, my mind, my popularity. My mother taught me that everything was measured against what you had, and the less you had, the less people thought of you. Even among my family members, there was always the surreptitious feel of “what are they thinking of me right now? Am I doing something that will get me in trouble?” It was a childhood full of self-doubt.

Carle’s family was the exact opposite. They made their own fun, they were unafraid of doing something out of the ordinary, and they were each other’s best friends. Carle’s childhood was full of family trips out West and being featured as the “Black Baron’s Prussian Guard Band,” performing during summer weekends at the Old Rhinebeck Aerodrome. All of this was accomplished by the most inexpensive means possible – camping out when camping wasn’t fashionable, bringing food from home rather than eating out, and foregoing some things in order to make the more important magic happen.

When we first started dating, I was still trying to live by my parents’ values, even though I made far less money than they did. As a result, I was wildly in debt, but didn’t know how else to make life work. I had never owned a house. I had never made any serious purchase except for a car. I had no idea how to save.

Carle still had his parents’ values, and as a result, even though he didn’t make a lot of money working for a small non-profit museum, he owned a house, a car, and had virtually no debt other than his mortgage.

It made for rough going in our first two years. For me, especially, I had to relearn how to think about money and “havingness.” Carle was patient with me, and I began to understand that fun could be had by making a pair of kites from tissue paper, sticks and string, rather than going to the mall and getting something expensive that I would use perhaps once.

Decades later, I’ve discovered that letting go of the need to “do-be-have” as the world suggests leaves me room to grow spiritually and emotionally.   It’s supported me in a very happy marriage.  It’s enabled me to be content with a very small house, and to live differently than my wealthy relations. It’s allowed me to give myself more space to simply live. And the fears and anxieties of my childhood are now merely memories.

Reassess your “do-be-have” ideas today.  See if there isn’t room for some true joys made out of paper and string, rather than expensive regrets.

“As we leave our wants, guilts, and avidity behind, we give ourselves more space to simply live.” – Corbie Mitleid