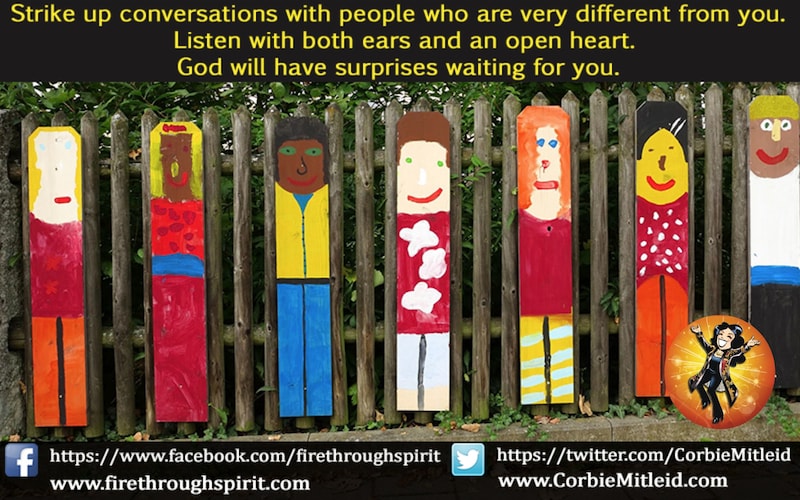 November is usually the end of my show season.  For many years, it finished with a flourish in Liverpool, New York. That traditional final weekend of lectures, clients and show booths signaled the beginning of my “down time” of the year – six weeks or so for me to recharge, revamp my schedule for the following year, and rethink how I want to present knowledge and adventure to the world through my offerings. It was always fun, and usually pretty predictable. Except for this one year…

You can imagine how the various psychics, shamans, mediums and other purveyors of metaphysics were taken aback when we found another group using the Holiday Inn for a major retreat: the American Baptist Youth Conference.

As we loaded in Friday night, we found a gaggle of teenage girls hanging out by the front doors of the hotel, all sporting various name tags and Jesus-themed t-shirts with evangelical messages, holding signs. When they realized we were for the psychic fair, their eyes grew round and they watched us warily as we came in and out with our various bags and boxes and booth paraphernalia.

Me, being me, I decided to take the bull by the horns. Approaching one of the girls who looked more interested than apprehensive, I struck up a conversation with her about what I do – and how I came to do it. We talked about being called to do spiritual work – that one can do our work and still be very much under the banner of the Christ – and that our job is to empower, to heal, to inspire and to bring people closer to God (by whatever name they see Him/Her/It). By the end of the conversation, there was a young mind that was willing to give us the benefit of the doubt, and simply get to know us rather than condemn us out of hand.

During the weekend, we saw the great majority of the teenagers (and many of their adult chaperones) look at us as if we were dusting the ground upon which we walked with swine flu and brimstone. We heard that prayers meetings were directed toward our finding our way out of the darkness. And there was virtually no interaction at all between Them and Us.

There was still that one light, however. The one young woman I’d spoken to Friday night had a couple of other conversations with me over the weekend, whenever we’d meet. Each time I found her insightful, polite, kind and curious – and absolutely nonjudgmental.

On Sunday, as a large wave of ABY attendees moved toward the morning prayer breakfast, I singled out one of the conference leaders – an adult – and asked if I might speak to her. She nodded guardedly, and we moved to the side of the corridor. I told her how impressed I was with that one young woman…that we’d had some great conversations. That a client I’d read during the weekend wanted to work with returning wounded soldiers but couldn’t do it on her own; so I’d suggested she go right into the ABY conference and enlist some of the teens, because I felt they’d do a good job of helping restore the spirit of those who came home broken. And I told her about my own spiritual journey, which wasn’t too far different from what any Christian would have hoped for on their own.

By the end of my tale, the woman was in tears, clearly moved. She explained that she felt that mediums and intuitives could do “the work of the Lord,” and that she had visited a medium with a friend. As a result, many fellow Baptists cautioned her about her road to Perdition, sure that she’d abandon her faith as a result of her considering ideas held by nonbelievers. “But there were things that medium told me that showed she was closer to the angels than I was,” she said quietly. “I’ve never made a blanket condemnation since.” She said she was on the way to her prayer breakfast and breakout meeting, and asked if she couldn’t tell my story as a “witness” that there was more to what was going on in the other ballroom than met the eye – or the soul. I said yes, of course.

We embraced warmly, and each one of us went about her day in her own milieu. I didn’t see her again.

But three people that weekend were open to surprise. To thinking differently about a group they were “sure” they knew about. And as a result, a bridge had been built – however tenuous, however fragile – for dialogue to cross and trust to find trust.

If you think hearts can’t open and ideas can’t change, I challenge you think differently.  Go into situations you think you’re sure about with no preconceptions. Strike up conversations with people who are very different from you. Listen with both ears and an open heart.

God will have surprises waiting for you.