Being a Co-Conspirator Is Better Than Being a Patient 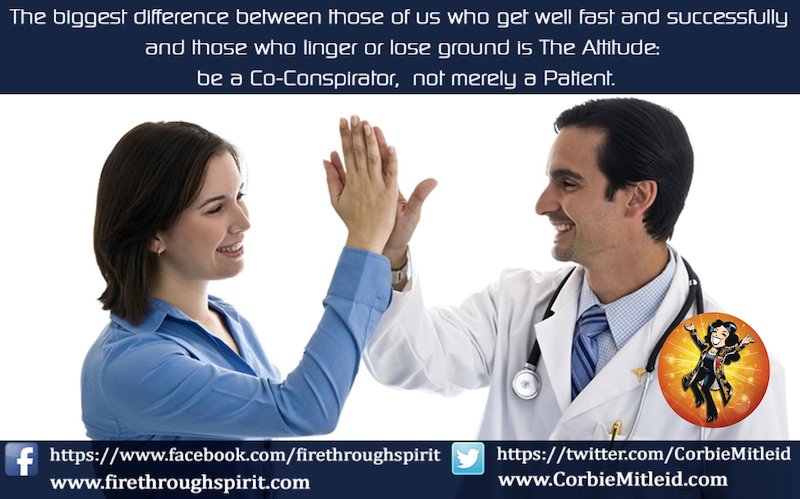 Being A Co-Conspirator Is Better Than Being A Patient

There I was, prepping to do one of my favorite shows in Buffalo and helping people with their Spiritual Awakening when I had a big fat one of my own.  My right implant decided to throw a party. Or a fit. Or a wrench in the monkey works, depending on your point of view.

Whatever your choice of venue, it sent me flying along I-90 from Buffalo to Boston, hitting Back Bay sleepless at sunrise and about 12 hours ahead of the Monster Blizzard of 2005. We checked into the hospital and awaited the arrival of my plastic surgeon, who will forever be referred to as Madame Artiste or Doc Miracle (because she IS one and she makes them happen). Her pronouncement was that somehow we’d gotten an infection in the implant site, and that while most people would yank it, pat me on the head and say ‘tough luck,’ she’d fight for me. It was a week of huge amounts of “bug drugs” (antibiotics), some surgery, and a lot of time on my hands.

At the original time of this writing — a week out, and leaving the hospital — things looked promising. No fever, color returning to normal, drainage from the site clear and nonremarkable. I still had six weeks or so of IV treatment, but I left the hospital intact, and between my mulish (oh, all right, iron-clad) determination and all the prayers of friends, family and colleagues, I thought we’d keep Corbie balanced on both sides for the foreseeable future. It’s now been well over a decade, and the doctors have declared me a miracle case (again!).

However, that hospital dance gave me some time to review what it’s like to be a patient. This was very different from my mast-and-recon exploit in June of 2004; we knew what we were getting then, and I’d done a lot of prep work. This one was Dorothy-in-the-maelstrom, and we weren’t sure where we were going to land, or with what parts still attached.

Watching other patients, listening to comments from the hospital staff to me and mine, I realized that the biggest difference between those of us who get out fast and successful and those who linger or lose ground is The Attitude. “Patients” too often think that it’s all up to the doctors and nurses and that no one else counts; that they have to sit/lie quietly, whine if they need help, and expect that the hospital stay will be a big negative. We Co-Conspirators, on the other hand, are extremely different. Let me share with you how being a Co-Conspirator is better than being a Patient:  what helped me so that, if you are ever required to have a hospital dance, you will get a feel for what will help you.

Learn everything you can about what they are doing. When you know what drugs you are taking, what the contra-indications are, and how you can help them work, you vastly improve your chances. For instance: there’s a particular antibiotic I was on that says “don’t give within two hours of calcium (among other things) because it renders the drug useless.” I knew that. The dose-giver did not. So since I’d had a breakfast with milk, I said “can we take this in two hours?” and explained why. No problem, and that meant one more dose that did what it was meant to do.

Advocate for yourself. While confined to bed, I had inflating, thigh high massage boots which I was required to wear, along with getting a daily belly-shot of blood thinner. Why? Because the medications I was on and surgery I’d had gave me a slight risk of clot and stroke (and so did my Tamoxifen). However, when I was once more up and running the halls every day, I asked if we couldn’t discontinue them (the boots were annoying and the shot was painful!) IF I made sure I kept my ‘vertical time’ as much as my ‘horizontal time’ during the day.   After some consultation, it was agreed that it was a reasonable trade-off.

The deal here is that if you’re willing to negotiate, and perhaps alter your own hospital day-to-day, the medical staff might be willing to work with you to avoid some of the more onerous items, or substitute real pains-in-the-patoot with lesser nuisances.

Don’t, however, do this just to see how many drugs you can avoid. If what you’re taking is important, or what they are doing is vital to your getting well, do it. With me, the hurdle was getting in a PICC (“peripherally inserted central catheter”): a thin strand of extremely pliable plastic tubing that snakes into the arm, around your shoulder and into one of the blood vessels going directly to your heart. In me, that’s a good 21 inches of exciting activity.   Was I scared? You bet. Your friendly correspondent is a first-class wuss when it comes to things invasive. However, my veins are such that, having to handle a rough drug like Vankomycin, they were collapsing every 24 hours. There are only so many veins to use. And the PICC protects veins from the bug drugs long enough for the drugs to hit the bloodstream at a point where it’s not so caustic to the plumbing.

At that point, I had to ask myself: what was my goal? To keep both implants. So I screwed up my courage and let them put in the line. And it wasn’t quite as bad as I’d imagined, either. This article was written on the computer while the morning dose was running in.

Get to know your staff. This is a very important part of being a Co-Conspirator rather than being a Patient.  Don’t just think of them as people in charge of getting you well. They are YOUR TEAM, your cheerleaders, the ones who want you walking out of their care whole, hale, and a hearty success story. Make sure that to them, you’re not just the patient in Bed 2, Room 813, but a name, a face, a history. Ask about them; touch on their lives a little, if they’ll let you. Treat them the way you would treat one of your own friends. And don’t be afraid to razz ‘em every once in a while. (The residents under my plastic surgeon tended to multiply – first day two, then three, then five. When they ‘held’ at five two days in a row, I told them I’d noticed their numbers generally grew daily and asked if the add-on had gotten lost down the hall.)

Sending carrot cake to them after your hospital stay doesn’t hurt either, I’ve noticed.

Everybody’s important. People think that there is a hierarchy in a hospital: doctors are at the top and the cleaning folk are at the bottom. Let me tell you, they are all human beings and all there with one goal in mind: to get you healthy and keep you comfortable while you’re working on it. From the people who made my bed to the ones who took my vitals to the ones who hooked up my IV every twelve hours, I got to know everyone by name, recognized faces, greeted everyone with warmth. Everyone. And it made a difference for me up and down the line.

I learned from my brother, a wonderful physician in his own right, that doctors and nurses are equals, just doing different jobs. His understanding of this very vital concept shows in the care his patients get. It shows in the fact that nurses all go the extra mile for him when he needs them to. And when you put that idea in your own Co-Conspirator’s Handbook, you will find everyone rising to the best of their abilities for you as well.

Differentiate between ‘alone’ and ‘lonely.’ People assume that if you’re not visited every moment by friends, family or medical staff, you’ll be devastatingly bored and lonely. Not true. You are going to be BUSHED. You are recuperating. Your body is in battle for you. And being alone is an opportunity for the Unseen World to come a bit closer in a quiet time. Take advantage of not needing to put anyone else first, for once!  Being a Co-Conspirator instead of being a Patient means conspiring to give yourself the nourishing downtime you need.

Be ready to be an Angel to someone else. The floor I was on had a little kitchen where we could get coffee or juice any time we wanted it. I wandered in a couple of mornings into my stay and found a woman there. We started chatting – her husband was in for a brain tumor. We traded experiences at the hospital, I told her about my own dance with cancer, and by the time we parted, I got a huge hug and she was a bit teary-eyed; she happened to need a pocketful of feisty optimism, and it’s a good thing it was wandering the halls.

One of my strongest beliefs is in ‘paying it forward.’ Remember that no matter how bad your stuff is, someone else is facing their own rough road, and a simple kindness from you can make all the difference. And the less you are star of your own pity party, the more you enjoy what’s out there, at whatever level your medical adventure will allow.

If it’s not done when you leave the hospital, don’t get sloppy! I went home with six weeks of IV antibiotics to deal with. Yes, I was doing shows, and flying cross-country, and dealing with all kinds of logistical hoorah in addition, now, to carrying bags of bug drugs and needles and such. But if I didn’t want to give up life for six weeks (and I certainly didn’t), then it was up to me to make the adjustments in my schedule and my traveling as necessary.

I encourage you to find ways of fitting your medical regimen, for however long it’s necessary, into your everyday life. There are a couple of reasons: the more routine you can return to, the faster you will feel normal again. Also, if you’re busy, you don’t dwell on the drugs, any side effects, or what they might (or might not) be doing.

This is a place where a happy medium is vital. Somewhere between letting your medical routine dictate where and how you breathe, and shoving it in when it’s convenient to everything else around you, you need to rearrange your days, make your tradeoffs, and keep your eye on the prize you’re after.

So remember:   Being a Co-Conspirator is better than being a Patient, especially with challenges like this.  I hope this is helpful for any of you out there who may face hospital time in the future. And in the meantime, hats off and heartfelt thanks to some of the best medical personnel I’ve ever run into at the Massachusetts General Hospital. They are world champions with hearts of gold, and damn fine doctors and nurses to boot.