Messages From the Other Side: One Last Glorious Gift From Shirley 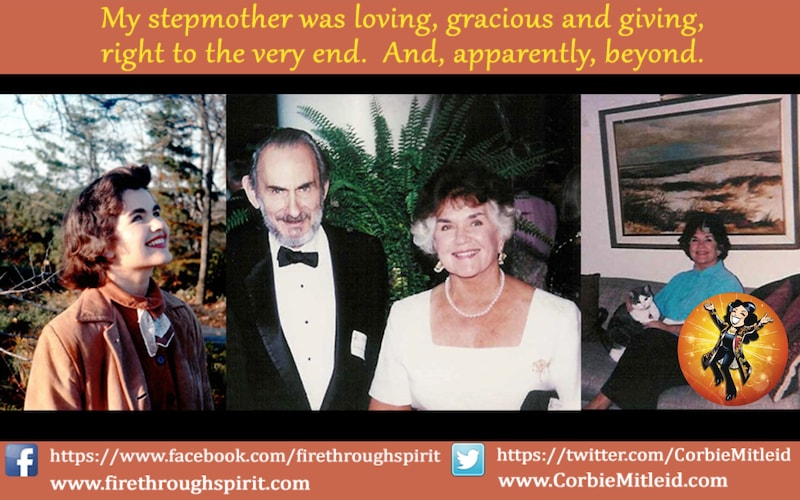 Messages From The Other Side: One Last Glorious Gift From Shirley

My beloved stepmother, Shirley, died on a cold February day in 2009. She was alone in the house where she’d lived with my father for decades, and which he had left to her seven years before. It was fast, said the police who found her, and the coroner some days later. A massive heart attack, perhaps a stroke; she went down and was gone within a minute or so.

Because Shirley was a landscape designer by trade and delight, and had lavished endless amounts of love and care on the family’s “little woods” behind the house, everyone agreed that we should wait until it was in full bloom to commemorate her life. And so we cremated her in February, but celebrated her in June.

The clouds and rain held off until long after the service, which wasn’t, technically, a service at all. About forty or so of her relations and friends gathered on the back patio that my father had built oh, so many years ago. And one by one, we told Shirley stories.

Shirley came to me in her fifties, and died at 80. So I never knew her younger self: more vibrant, incredibly gorgeous, with a brilliant smile and a heart-stopping face, gracious and elegant. I heard about her deep love of nature and trees, her curiosity about everything, her laughing jags (so like mine!), and everything she gave her children Kappy, John and Sam, that live on in their lives and passions.

I told a story, too, that only I could tell. Shirley was the member of the family who completely, unconditionally accepted my otherworldly nature. She believed in my work, and encouraged me to shine, even if the rest of the family didn’t quite understand what I did, or why I did it.   So every couple of years, I’d receive one of Shirley’s breathless calls, telling me of finding a purple cellophane star in the middle of her living room floor. One like the bright and silly stars that looped through the house when Dad was alive, but had been cleared and thrown out at his death.

“This morning,” she’d say, in her breathy, half-whispering voice, “I found a STAR. Do you think — it could be your father?”

And I’d always laugh, and say “Shirley, of course it is! Why would you ever doubt it?” I knew how much my father had adored her — and if he could send her a star from Heaven, he would. And, I’m sure, did.

And there’d be a satisfied sigh. “I THOUGHT so.”

Shirley never told anyone about our secret phone calls.   I figured she wouldn’t mind if I shared it at the memorial.

But someone topped my story. . .

There was a little man that I’d never seen before at the back of the crowd, who clearly seemed nervous but anxious to share something. At the very end, he walked to the front of the chairs of people, to the little ‘speaking area,’ and cleared his throat.

“Someone told me today that this was her funeral, and that she had died in February. I was stunned. I mean, I hadn’t seen a lot of her and I knew she hadn’t been feeling well… but…

“I saw Shirley in her garden, and it was four or five weeks ago. It was about 10:30 at night, and I saw Shirley walking around in her back yard, in her bathrobe. So I went down and asked if everything was all right. She turned to me but she didn’t say anything. I asked if I could do anything for her, and she still didn’t say anything. So then I said if she needed anything, that she should call us. And I turned around and went back into the house and I didn’t think anything of it. And now you tell me she’s been dead since February. But I know what I saw. ”

Everyone at the memorial was stunned. Kappy, her daughter, and I were elated. And when the memorial broke up right after that, she and I flew to Lou before he escaped into his own yard.

And so Shirley Ruth Holmes Wells Dorkin left us with a magnificent gift. She showed us that we do, indeed, go on. She blew open a door that I’d still been keeping shut around my family — how often Dad steps in to help me with my own medical readings for clients; the conversation I’d had with Shirley and Dad through a Lily Dale medium that was too precise in words and emotion and private family jokes to be anyone but really them.

That was Shirley. Loving, gracious and giving, right to the very end. And apparently, beyond.