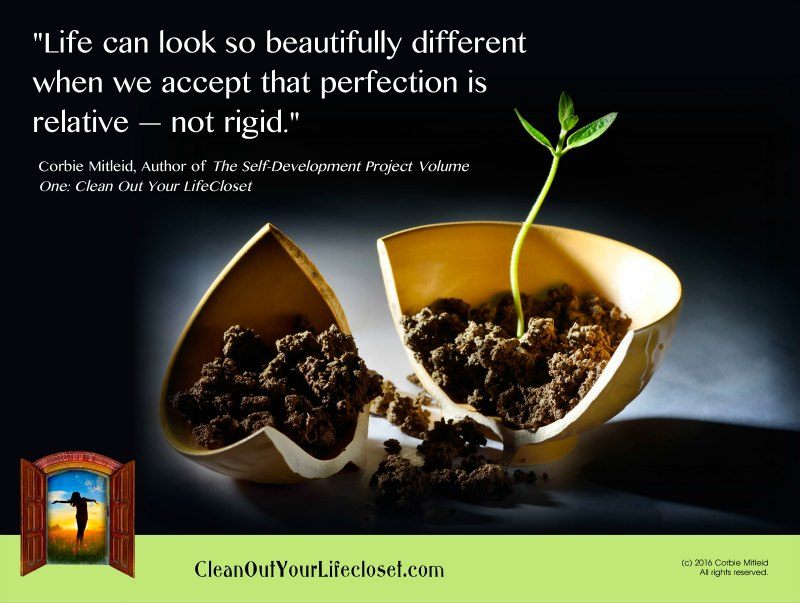 Children can have some of the weirdest rules for what they’ll eat and what they won’t. My brother never liked slices of roast beef that had “frames” (edges of fat) on them. Though lamb chops were my favorite meal, I wouldn’t touch the meat if someone had taken it off the bone for me in mistaken solicitude. My friend Alice refused to eat mashed potatoes if there was the smallest lump in evidence. And Chuck wouldn’t bite into an apple if it had any dark spots on it, convinced that worms lurked beneath the surface. For all four of us, no amount of logic, cajoling or ordering us “or else” got us to eat those Objectionable Mouthfuls.

Adults can retain some of that insistence on perfection when it comes to life experiences. Several years ago, I tried my hand at promoting a small psychic fair. I drove myself crazy making sure that everything was “perfect” – the right weekend, the pristine fair site, the really good intuitives and vendors. I had an image of how it was supposed to go, and what a champion I’d appear to be. After all, I’d done years of fairs. I knew what a good fair looked like. And I was going to accept nothing less.

Well, as the axiom goes, “Man proposes and God disposes.” Whatever could go wrong that day did. The venue where we were holding the event had a sewer problem, and the entire building smelled like sulphur all weekend. The field next to the venue where several people were setting up hadn’t gotten mowed as well as it should have, making set up and attendance traffic difficult. One of the newspapers where I’d placed an ad had scheduled it for the wrong weekend. And there was a major accident at the exit off the local highway that led to our event.

Unlike today, I didn’t take it in stride, I didn’t try seeking alternatives. I was mad as a hornet’s nest. I was stomping around, gruff and terse, and completely convinced that everyone would see me as incompetent when they didn’t do as well that weekend as I had confidently predicted. And the metaphysical stricture be careful what you wish for, because you’re going to get it came true. I lost friends because of my actions. Two of the promoters for whom I used to read disinvited me to their future events, convinced I wasn’t full of enough “love and light” for their fairgoers. And it stuck in my craw for years that what had started with such joy and anticipation turned out to be one of the worst business disasters I’d ever faced.

It took me a long time to be able to review that day dispassionately. And I know that, if I ran it today, it would be completely different. I would get people together at the site and ask for a brainstorming session, taking their input and making different decisions. I would stay calm. I wouldn’t beat myself up over things I could not fix, like the accident. The fair would have been a time of getting together with friends and colleagues ruefully laughing over a “Murphy weekend” rather than a memory full of difficult lessons.

When you make plans that don’t unfold the way you’ve envisioned them don’t get mad, and don’t see them as faulty. See them instead as a chance to find a different kind of perfection that the dictionary definition. When you do, be careful what you wish for, because you’re going to get it might bring you something unexpected but wonderful.

“Life can look so beautifully different when we accept that perfection is relative – not rigid.” – Corbie Mitleid