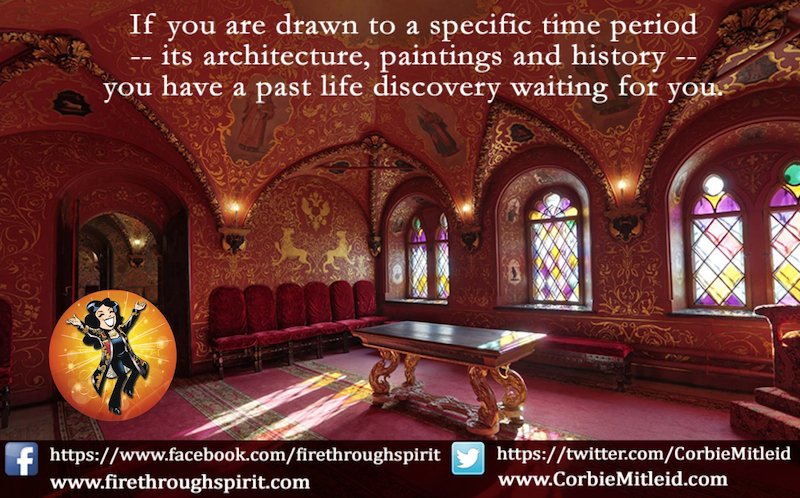 Specific health issues, or a draw to a specific time period, often signal past life messages, and are a great way to begin exploring.  Here are three clear examples:

Why I am drawn to English history/Henry VIII period?

David, People are often drawn to a particular time period. While it may not mean you were royalty or someone famous – or even specifically from that time — that draw will very often help highlight lessons and talents you have brought forward into this life as useful tools.  I sense that you have been drawn to the pomp and magnificence of English royalty for several lifetimes, even though I did not detect a significant life specifically during the Tudor period. For most of your existences – and I see them as more male than female (65%-35%), you have been someone with an adventurous streak whose circumstances did not allow full expression. Here are two examples from your Akashic records:

In mid-18th century New England, you were the son of a Congregationalist minister who was destined to follow in your father’s footsteps, though you really had NO interest in doing so. Still, as the eldest child of six (the rest girls) you were expected to be the “little minister” and be even more circumspect in your behavior than most children. You succeeded in escaping the family expectations through the Revolutionary War. Your sympathies were acutely Loyalist, because of that part of you which felt that the continuity of the line of royalty was innately right. Your family, however, were staunch Patriots, and sided more with the Adamses. You left and found small ways to support the British troops; though you were not a soldier yourself, you assisted with repair of ironmongery and camp gear. That short period of battlefield life fired up the dormant lust for adventure that was never truly satisfied. You ended up in Canada, married with a son, where you worked as an artisan and farmer. Your greatest treasures were the small store of novels that brought you into the land of exploit and excitement that you sought yet were not destined to have.

A life in 19th century England finds that you were a caretaker at Hampton Court Palace. There had been a legend in your family, long passed down but completely unsubstantiated, that you were descended from one of Henry’s bastards (the un-famous ones, not the famous ones). When in the 1840s it was no longer used by the royal family but was open to the public, you felt you absolutely had to work there; you were sure you would find your answers. Your skill was gardening, keeping the grounds pristine and beautiful, and you were hired in short order. You never found your “missing link” to your heritage but could not resist telling fanciful stories about your history to anyone who would listen, and you began to have a reputation for talking to ghosts – again not true, but you felt it would be “lively” for the public to think so, and so you cultivated it. You did not marry, though there were a few discreet alliances; you preferred your ghosts and “maybe” existence to a more mundane one.

It is no surprise that you have found a way to reach the 16th century in this life!

Why do I have so many health issues in this life, and are there any issues from past lives that are affecting my health now?

Deedee, I sense that one of your karmic challenges for several lifetimes has been the transcendence of mind over the physical. You’ve done this both through a mystical bent and through wanting to improve medicine as it is practiced. These are the first two lives with which I was presented, and will be good examples, though you have several others along the same line.

In the 14th century you were Italian, and inspired by the mystics Francis of Assisi and Catherine of Sienna. Your parents were rough, crude and saw religion only as another responsibility to get out of; in private, they did not believe that there was anything to this “God nonsense.” You, on the other hand, had a real sense of the Unseen in the world. You did everything you could to distance yourself from the physical world to go “visiting with the angels.” You were considered lazy and soft-headed by your parents, as you were clearly not as bothered by poverty as they were; you were the target for beatings and punishment. You saw all of this as God’s way of testing you. You died at the age of fifteen, still under your parents’ roof because you now had a village reputation as mentally deficient. Because you did not bring in firewood quickly enough on a winter’s night, your parents threw you out of the house “to see what freezing is like.” You were ill-clad, and quickly succumbed to hypothermia. When you were found in the morning, your parents told everyone that you had been mad and flung yourself out of the house “even though we tried to hold the poor girl back.” If you have trouble with circulation in your hands and feet this time, it is likely traceable to this life experience.

In 17th century Holland, you were a competent herbalist married to a man who aspired to be a physician but could not afford the education. Believing that he could be sent to the university by a patron if he proved himself, you assisted him with experiments and the locals who came to him with various ailments. He often overrode you in terms of what herbs should go into what medicines. In exasperation, and because you believed “innocents” should not be subjected to his quackery, ¬you began taking the medicines to show him the side effects. They were never terrible one at a time, but over the months and years they took their toll. Your stomach was bloated, your periods infrequent; you had some peripheral neuropathy and constant headaches. As a result, when you actually DID have cancer, he assumed that it was just your complaints again. You died without any medical assistance or intervention, because your husband did not want you going to a real physician or surgeon and showing them just how incompetent he really was.

The illnesses you have in this life have nothing to do with “punishment,” but more your soul’s seeking to help others through being an example. Your illnesses assist your doctors to learn more, and your courage assists others who will go through such things in the future. However, I would encourage you to embrace the idea that you have “done your work” along that line this time, and remember that one can learn as much about health through being healthy as through being ill.

(I received a fascinating message from Diana after I sent her my discoveries:)

Very interesting, thank you so much! I have a constant ‘buzz” in my head: “mind over matter,” you just proved that the words I hear are right. I never kind of viewed my illnesses as “punishment” though not to say that I haven’t complained about them a lot. My spiritual path in this life is tightly combined with many ill days in bed. This is how my learning took place, but I feel that the learning part is done, both spiritually and physically (or at least I very much hope it is), now is just the ‘residual” leftovers where ‘mind over matter” is very much the way to go.

Interesting you said about hands and feet being cold, almost always, even on many warm days, I’m one of those people who can have a heater on in July. And it’s fascinating about the herbalist life. I do have a lot of stomach issues; maybe it’s the leftover cell memory. Interesting, too that I had cancer in that life also. The difference in this life, I do not answer to a man this time around and was able to get treated (though I always felt if I didn’t leave my husband prior to that, I’d not survive cancer by either finding it much later, or by treatment not being effective).  And I’m still interested in medicine (I work in a hospital), though more from holistic/mental health point of view that traditional.

In this life, I have never, ever touched alcohol, drugs, or cigarettes. I am petrified of ‘touching’ or getting interested in anything that could even possibly result in an addiction. It’s weird…in all of my 46 years, I have never even been tempted to alter my body chemistry.

Kelly, you have watched family members and friends lose their minds and lives to opiates and alcohol over many lifetimes. You always seek to help others to overcome these tendencies because of one specific life in Russia in the 8th century.

Briefly, in that eighth century life there was a rampant case of ergotism in your Russian village. You were one of those most horribly affected, and it was the hallucinogenic aspect of it that hit you most. While others were struck with convulsions and nausea, you saw them “vomiting out devils and monstrous apparitions” and could not get away from these creatures. This situation lasted three weeks until you (and many of the others) died from the poisoning.

Your soul desired to avoid such terrifying hallucinations and pain for a large cycle of lifetimes, and as your soul tends towards service to others, you asked to be put in situations where you might turn others away from alcohol and drugs.

There have been lives as a Buddhist monk, a German ascetic and a 20th century “Temperance woman,” but the prime example I was given was as a missionary in 19th century India (the part that is now Pakistan), during the Raj. Opium use, hashish and other hallucinogenic drugs were your anathema, as well as the lower orders of military getting wildly drunk on either rotgut gin and whiskey or the local fermentations. Your husband was not quite as against alcohol as you were, and as a matter of fact “took a tot” on rare occasions with the men in the Viceroy’s offices in Calcutta. You were eloquent enough to make a discernable difference, at least among the young officers. You had a harder time with the Indian population who felt that the English did not understand the sacredness of “bhang.” Every life you turned from alcohol and drugs was a personal triumph, and everyone who turned your word away merely strengthened your belief that “maintaining a clean mind and body creates a clean soul.”

(Kelly’s response upon getting my “past life download” for her question:)

Holy cow, Corbie!  I just had a chance to Google ‘ergotism’ and again, I’m blown away…. I am gluten sensitive in this life…and I can’t eat GRAINS (wheat, barley, rye, oats, and corn). I am also allergic to penicillin… (According to Wikipedia, the two contributors to ergotism).  Amazing how our physical body manifests soul experiences from a thousand+ years ago…Thank you again for this insight! WOW.