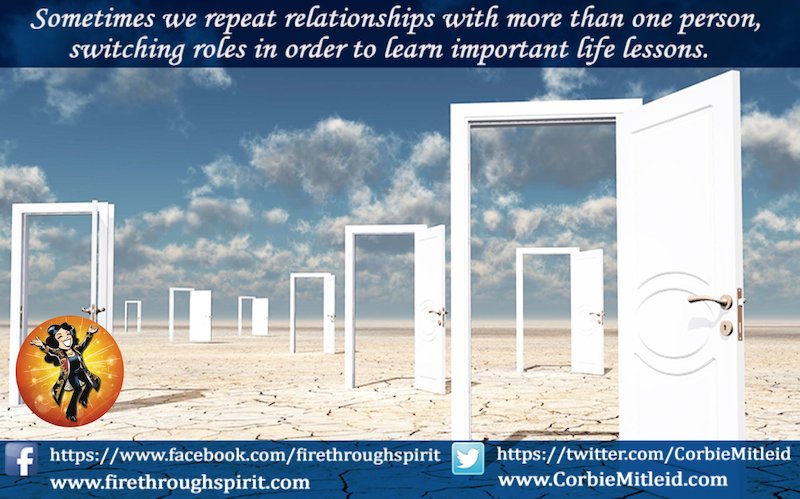 Sometimes we repeat relationships with more than one person, switching roles in order to learn important life lessons. Just looking at one life doesn’t show the complicated relationships, and a series needs to be examined. Let’s look at one such example.

My husand and I got along very well. I always felt, however, that he was afraid to fully love and embrace me, as if it made him uncomfortable to be too close or affectionate. Years of dedicating myself to self-improvement, hoping that if I improved, he would love me the way I wanted, were to no avail. So we divorced.

I still have a constant nagging that it was a mistake. I can’t sleep well, I’ve gained over 30 pounds, and I’m still depressed. My ex husband has never told me he misses me or that he wanted me to come home. In fact, when I first told him I was leaving he didn’t even try to get me to stay. I miss him and the times we had that we laughed and played around. Everything was seemingly going very well at the time I left. It’s hard for me to understand how he has not missed me

I met a new guy three years ago. He is everything I wanted my ex to be in terms of affection, sweet to me and his #1 desire is to make sure I’m happy and loved. What past lives involved both my ex and the new guy?

The first sense I have for you, Melina, is that you have too often cared for/about people who do not care for you, but as long as you don’t need to look at the situation, it rides along pleasantly. But when it crashes, it crashes hard.

With regard to the lack of love and affection and hands-off from your ex, this is one of his specific challenges, and you agreed to be in a marriage relationship with him to help him overcome this hurdle. There is that within him that seeks to study the world from a distance, yet he cannot fulfill his destiny without truly learning how to interact with people. You offered him this chance, but he fell back into old ways from a previous life, and because the “caste system” of Imperial England no longer operates today, he keeps missing the mark, as it were, and lacks the ability to inspire trust and to get people to follow his lead.

You have come in with quite the juxtaposition – a great deal of leadership ability yourself, with a fierce desire for independence, change, freedom and experience. However, balance that against your huge challenge of oversensitivity to other people and you will see how this life was set up to be quite the challenge.

There have been many lives where you had the chance to make a difference, whether at home or in the public sector. You tend to only make it 80%, based on your concern about how you are perceived by a certain factor, or what would be deemed “appropriate” to your station in life. Time and again you were given abilities to go further, but kept “looking over your shoulder” so to speak, which pulled you from the path.

Lives in which this happened:

PREDISCOVERY NORTH AMERICA: chief hunter of small subset tribe of Assiniboine (southern central Canada) in a starvation/cold cycle. Listened too carefully to the shaman instead of trusting your own instincts about following the bison, also afraid of confronting the chief who left the hard thinking to the medicine man. He said that hunting during a certain time of year would destroy the herds forever, and you believed him. Your tribe died of starvation because you and your fellow hunters could not feed them in the game-scoured landscape; the tribe did not move south because they waited too long and the blizzards caught them.

LATVIA, 12th CENTURY: You were a high-ranking woman in a pagan tribe. Part of your belief system was that woman’s power was in their blood, and during their time of menstruation the blood was collected and burned. You were entrusted in collecting and caching the cloths that women used during their moon-time and you were supposed to burn them ritually – at a certain time, a certain place, and with certain words – and you saw this as the key to your power and prestige.   This was during a time when the Pope was forcing those non-Christians to convert whether they wanted to our not. Because the burning took place far away from the tribal village, you overheard a group of Crusaders who had camped near the ritual place and who were planning to overrun the village and carry out the Pope’s orders of “conversion by the sword.” You could have saved the village, but instead chose to burn the cloths upwind of the Crusaders, fearing that the village would be lost if you did not fulfill your duty. The exact opposite was true – the Crusaders found your tracks and figured out your shortcut to the village, and by the time you came back your people were raped, captured or destroyed.

ENGLAND 1800s: The feeling I get is that you were an older person responsible for your ex-husband in the very early 1800s. This was a governess/wealthy child situation. You were a governess to the Hughes family in Shropshire, in the west of England. Simon Hughes (your ex husband) was the son that came after four miscarriages of female babies. He was doted on and spoiled, yet his father was very harsh and very clear that the child must be the best of men when he grew up and take over the family lands and businesses.

You, in turn, were the eldest of seven girls and three boys. Your family was “shabby genteel” (lower middle class) and it was drummed into you that your job as a governess would be to “instill in your betters the morals and character befitting their station.” The fact that you were not of their station didn’t seem to occur to anyone – how would you know, other than from bad novels, what was appropriate?

Your parents did not know how to show affection, so you were very love and touch-starved. You lavished your affection on little Simon. Simon was by nature pleasure-loving but very smart; he knew that in order to get his way he had to appear to behave, but was able to “play” people with no difficulty. He was also very self-assured as he grew older. He easily understood what people wanted from him, and gave just enough to make them think he was wholeheartedly concerned with their wellbeing. Yet he kept most of his private thoughts and desires to himself

You kept reminding him through the years that he was “born into that life which would make him responsible for the welfare of those beneath him.” You thought that “welfare” was the important word. He, instead, focused inwardly on the idea that such people were “beneath” him and, therefore, their feelings were in the main unimportant, only useful for exploitation in a given situation.

Because you had made Simon your whole life, you would not hear ill spoken of him. When there was a question of appropriateness of behavior, you would bring it to him, trading on your longstanding relationship to allow you to speak to him in a way that some might deem inappropriate, given the difference in your station. But he would always listen to you and thank you for your counsel. The fact that he immediately dismissed it from his mind finally began to sink in when he was an adult, but you still chose to believe he might change if you could just find the right words to spark his conscience.

You ended up as governess to his children when he was married. Simon’s family chose for him a dull but fertile girl who kept popping out babies as if it was an “annual event” until they had six, at which point she conveniently died, leaving Simon a wealthy widower who was the target of most of the eligible girls of Shropshire. Simon thoroughly enjoyed the attention, and played one against the other shamelessly, to the point where you could not stomach it.

Yet this time, when you brought up his behavior, he said “it was not for you to judge the behavior of your betters.” When you spluttered that you “could not in good conscience support such wanton usage,” Simon then shrugged and left the room, saying “as you wish. But do not fault me if I take you at your word.” A few days later, you saw a carriage arrive, and watched a woman come out with boxes and bags. She was clearly not one of the “gentry,” but you had no idea who she was.

Within the hour, you were called to the housekeeper’s office, and told that your services were no longer required. You were given your year’s wages of 50 pounds, and a 20 pound bonus per child “in appreciation” and then were asked to have your things packed and ready to be moved by the end of the day. The Master “was also generous enough to pay your lodgings for a fortnight” at the local boarding house.

Thus, after thirty years of service, you were taken at your word about leaving, and dismissed with nothing more than what would be calculated today as less than $40,000.

You were stunned. But there was nothing you could do.

You eventually did find work in a household far less grand but much more kind – interestingly, the master of that house was this life’s new guy. Yet you never could understand what you had done to be treated so cavalierly by your ex, and were ever after somewhat suspicious of people’s kindness, resulting in a very lonely life. You were pensioned off some fifteen years later, and died in a small cottage not far from your ex’s estate.

From that point, there were 2 other lives (plus this one) where you interacted with either your husband or your new man:

CHINA: 1870s. A male life, where you were part of the silk and tea trade as a middleman between producers and exporters. Both men were two exporters who would bid for your goods. Your ex offered more but your new guy would pay more promptly, so you would pit one against the other, trying for the best compromise.

WESTERN UNITED STATES: 1920s. You and your new guy were brothers. You came back wounded from World War One, and he got you work in the cannery operation that he oversaw. You were conscious of the disfiguration of your face and arms from mustard gas burns, but when your new guy was around, your discomfort was minimized. He introduced you to a blind girl whose father also worked at the cannery, and you married her, relieved that your face and arms did not matter to her. You lived a calm but un-inspiring life until you died in the 1950s.