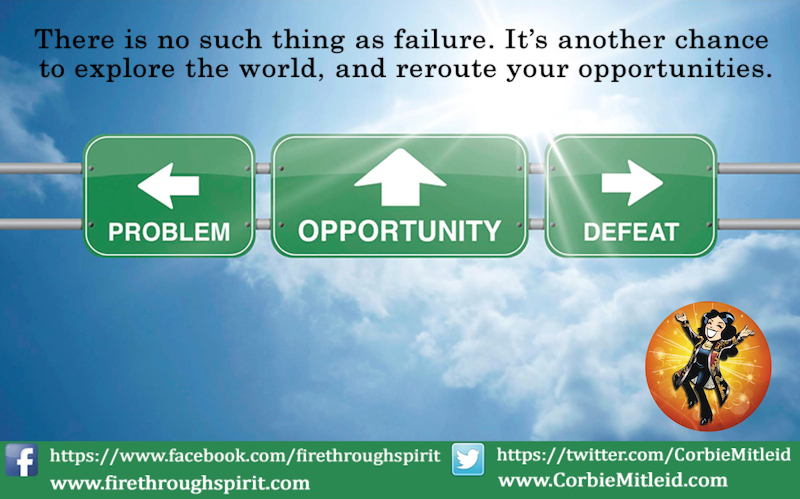 I know a fellow intuitive who’s wildly different from everyone else in his family. For them, failure is shameful, not to be discussed, and you either succeed at something or don’t bother doing it at all. That’s why they tend to think of him as a failure, even though he’s not.

He doesn’t care. “Failure? It’s a rerouted opportunity. If this didn’t work, how about this? Or this? Or this? What can I take from the “failure” to use where I know success is waiting to happen around the corner?” What a wise fellow!

“A few years back, I got kicked in the butt that way,” he said. “I put heart and soul into creating a spiritual cruise. Time, money, dreams, encouragement for everyone else involved – I gave it all I had. But then the US economy flatlined. Everyone cut back on driving, on food costs, on every discretionary expense they had – and those who might have gone without a moment’s hesitation the year before looked at it wistfully, said it sounded like a great time, but they just couldn’t swing it.

“So I pulled the plug on it in June. And another psychic decided that she and her boyfriend would take it over, change the focus, and see if it sailed. And I found out about it through the grapevine rather than be told about it straight out.

“But it’s a rerouted opportunity — just one more form of Spiritual Awakening. What did it teach me? That I do solo gigs well and enjoy them more. What’s around the corner for me? A solo gig ghostwriting a major book, which appeared only AFTER I let the cruise go. Because the Universe knew I wouldn’t have time to do the book if I was still running the cruise!”

“So my attention goes to the new gig, the new opportunity. What the psychic and her boyfriend choose to do is for them to decide. It’s not mine to judge.”

As far as perceived failure goes, I’ve had my own taste of it, many times. Back when I was an Elfquest author, there was talk of my going to Austria to do some fan engagements. Couldn’t get it paid for, and at that point I wasn’t flush enough myself. There have been novels I’ve started – especially one very detailed World War One piece – which lie, half-finished, in the file cabinets in the basement. I’ve tried pulling together a romantic weekend for LGBT couples, but didn’t get the support from the locals that was required

But for every failure, the rerouted opportunities have been wonderful and wild successes:

No matter how perilous the times, how difficult the job market, I have always found work, and been good at what I chose to do. If the career focus had to change at various times, I didn’t think of it as failure, but more “All right – next?” And every career gave me gifts and talents that I am using right now as an intuitive counselor: gifts that I might not have now if I hadn’t done my turns as an executive recruiter…an editor…an author…an actress…a radio host…a television producer…an executive assistant for more than one powerful CEO…and more.

My current marriage has benefited from the previous two which did not last. The strength of our partnership would not exist if there had not been lessons and failures on which to build a more solid foundation for us.

I took a solo career in an atypical field from zero to full time, respected and prosperous in five years, and into the stratosphere today.

I’ve gone three times around the dance floor with cancer and gotten off in one piece each time. Scarred, yes – but only on the outside.

Most importantly, through my failures, rebounds and resilience, I’ve inspired others to believe that they, too, can reroute their opportunities.

That’s how I see things. It’s how I’ve not only survived, but thrived, in circumstances that would drive others to despair. Because there is no such thing as failure. Rerouted opportunities are another chance to explore the world. And as long as you are born, live, learn, love and pass on what you’ve learned to just one other person — believe me: you have succeeded.