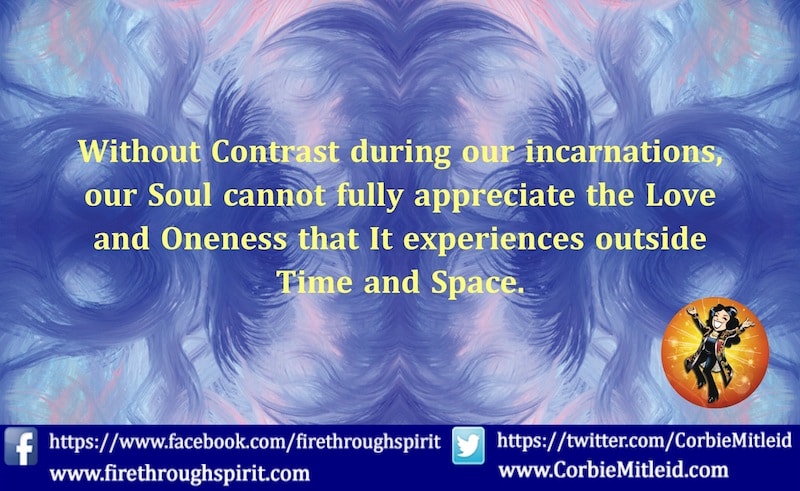 Contrast is at the core of our soul plan experiences. Because we come from a place where all is One, all is Connected, outside of Time and Space, we learn many of our core lessons in a body that is subject to duality, time and space, and separation from All That Is – that is, until we Remember that we are truly All part of the One. You cannot know joy if there is no sorrow; you cannot know peace unless you have experienced its lack – whether through worry, war or chaos. In that sense, every Soul Plan contains the goal of Contrast along with any of its other goals.

When we choose Contrast as a major objective in our Soul Plan, it is likely we are doing a Great Study (sometimes called a Grand Cycle). Let us assume that the Soul wants to study compassion. It may go through a series of lives where its life is full of love and compassion, both given and received. It may then go through lives where very little compassion is available to it from others, and it must make its way in the world without the kindness and stability compassion brings. It may then do a third series of lives where it has very little compassion for other beings or circumstances, to study how that affects its own life situations. When it has completed this Grand Cycle of learning, the Soul has brought back a many-faceted view of how compassion works in the material world. Has Karma also been created in these lives in other matters – healing, service, unbalanced energy, healing of beliefs? Yes, more than likely – but the Grand Cycle of Contrast is the most important Karmic Road.

Let’s look at some examples. If a Soul wants to examine the entire view around Abundance and trusting the Universe, it might have a series of lives like this:

▪ A life as a Benedictine monk, where abundance is relative (monks having very little in the way of material possessions) but the assurance that God has matters in hand as long as you believe the right way is very strong.
▪ A life as a stockbroker in the 1920s, where huge amounts of money made in the early part of the decade disappear like smoke in 1929, giving a very strong contrast around “having” v. “not having.”
▪ Three successive lives in Russia – one as a member of the wealthy ruling class, one as a member of the serf class, and one in the Communist Soviet Union where all is supposed to be equally distributed.
▪ A life in the American West in a First Nations tribe who believes that major celebrations should be held with a “potlatch,” where the celebrating party gives away virtually everything they own.

• A life as a member of the European Crusader force, where they fight Saracens believing that it is God’s will and they are terrified of being sent to Hell.
• A life as a Jew at Bergen-Belsen, facing death after years of abuse at the hands of the Nazis.
• A person in Salem, Massachusetts who points accusatory fingers at other members of the community because they are frightened they might be accused of witchcraft themselves.
• A person facing a terminal diagnosis of a disease at an early age.
• A person who, having the chance to “die on the operating table” after a serious accident chooses to come back and live their lives in a very damaged body.
• A person who must choose whether or not to run into a burning building to save loved ones – with all the ensuing consequences of guilt, injury, and possible failure.

And if a Soul wants to examine self-love and self-worth, these are the lifepaths it might choose:

• A child who chooses a path not requiring education when the rest of the family has graduate degrees.
• A male member of a society that devalues the opposite sex as a matter of course.
• A person whose chosen career depends completely on other’s judgment of their worth.
• A person born into a society that, as a whole, believes self-deprecation and severe humility is the way to grace.
• A person born into a dysfunctional family that can only maintain individual personality dominance by cutting down the other family members.
• An orphan, or a child abandoned in its early years by parents who do not want it.

Notice than the Soul can come in on either side of the question – abundant or in want, in courage or in fear, in self-worth or in self-judgment. How the Soul deals with the “set up” of its lifepath – the scripting, blocking, and character development, if you will – is what will bring the lessons back to the Soul once the incarnation is finished.

Contrast is guaranteed to be part of your lifepath. As well as the examples shown above, we could talk about power, or kindness, or intellect – anything that has an “opposite,” or contrast, can be studied by the Soul as a fascinating project. But all of the examinations work to bring the Soul back to a better understanding of Love and Oneness. In the end, that is the one Cosmic Truth, and all of the contrasts that are experienced within a Soul’s incarnations are to assist that Soul in truly, fully appreciating that which It experiences in the Inifinite, Timeless embrace of the One from Which All Proceeds.