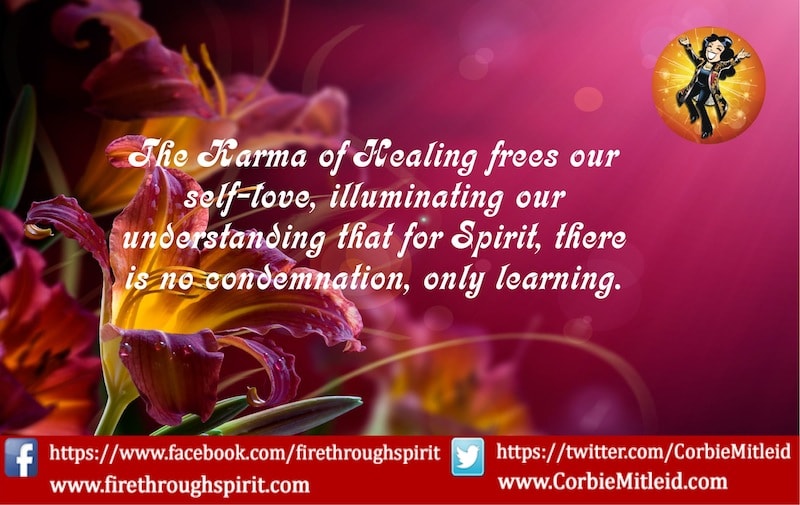 Healing is a word that has a thousand shades of meaning. The simplest idea of healing is a cut: you fall, your hand knocks against a sharp edge and your palm has a gash that bleeds. You clean it up, perhaps put a bandage or antibiotic on it, and in a few days your hand looks like it never happened. We say “the cut was healed.”

But when it comes to major illnesses, emotions, situations, even Karma, healing has a much different, many-layered meaning. Healing, in this case, may be secondary to the original occurrence – a life challenge around physical illness, for instance, may not be about healing the illness so much as allowing the experience of the illness, and the person’s reaction to the illness, to heal emotional wounds brought forward from other lives. (This is why very often, as a hands-on healer, I tell a client “we may get a healing but not a cure.” They are entirely different things.) Here’s how Cassandra, spirit guide of Christina in YOUR SOUL’S PLAN, explains it:

Learning and healing from a specific life challenge raises the auric field of the one who has survived a challenge. Others in their presence know they have something that bathes them in hope and faith. The experience need not be the same; just the healing frequency can carry the soul forward, but the receiving soul must be prepared to receive. Even if the physical form of the receiver] does not change or “heal” by Earth standards, the soul moves to new heights.

When you look at your pre-birth plans via a Soul Plan reading, you will see that you have come up with scenarios and life “itineraries” that bring your soul learning and growth through your experiences. Healing is one of the five major subjects that a Soul might choose to investigate in a particular incarnation. This healing could be in relationships with others; it could be healing of fears and negative emotions with the outcomes they brought in previous incarnations; they may be healing of others through our own challenges (though that partners very often with the “service” aspect of Karma, which I’ll talk about in another article). Our actions of kindness and compassion may be the healing trigger for others’ pain and challenges planned in their lifetimes.

Let’s look at three ways in which healing might be the focus of a person’s Karmic plans in a given lifetime:

Healing of emotions: In YOUR SOUL’S PLAN, one of the subjects was Penelope, who came into this life profoundly deaf. This was something she actually requested. Why? In her previous life, she heard her mother shot to death by the mother’s boyfriend while she was in the next room. This left her emotionally scarred, with a great deal of fear that followed her out of that life. When planning her current life and the details surrounding it, she specifically asked to come in without any hearing ability, so that she could concentrate on other important challenges and not fear hearing something as horrible and traumatic as she did in the last life.

Healing of relationships: Barry had a lifetime where he was brutally beaten by his father for the smallest transgression – a B on a report card instead of an A, his room not being military-tidy, answering his mother in a manner his father thought the least bit disrespectful. As a result, Barry was emotionally numb throughout his adult life, and could not form normal relationships; he assumed that people either did things right or were severely punished for it. He snapped when he was in his 50s and committed a murder –suicide involving a co-worker. He chose to come back with a hair-trigger temper like his father’s, but partnered with a soul (not usually part of his circle) who agreed to be a child that might initiate anger by being the same sort of child he had been – yet was an older soul who exhibited a monumental amount of compassion and understanding for his father. This child helped Barry understand that there were other ways to handle transgressions and mistakes. By not succumbing to anger, he learned to forgive such mistakes and, therefore, dislodged the old energy from the previous life. Additionally, when his former father came into his life as a son-in-law, Barry was welcoming and non-judgmental, thereby also clearing Karma directly.

Physical healing: Valerie came into several lives with a genetic makeup that held the likelihood of addictive behavior. She has been addicted to alcohol and drugs of various kinds in each one, always seeking to find the way to overcome the addiction. However, in the most recent life, she came in with cocaine addiction, but made better and more consistent efforts to defeat the addiction, and succeeded – thereby also being a good role model for others in her abstinence program.

James is another example. Having died from a gangrenous stomach wound sustained during a knife fight over a girlfriend in his last life, he has retained that “etheric wound” in this one, but paying attention to his self care and finding peaceful ways to negotiate his way through relationships, this etheric scar and wound is healed.

Healing is so beautiful, so valuable. And as we heal ourselves, we extend healing to the world. One of the prime examples in YOUR SOUL’S PLAN was Jon, who came in with AIDS as part of his lifepath. Living in a small town, being gay where gay was considered an abomination, believing that non-nurturing relationships in his life were all he deserved brought him to face the diagnosis of this disease. Working with the channels in the book, Jon learned that self-love and that tolerance and acceptance, rather than self-condemnation, was the healing that he truly needed, rather than simply looking for a “cure.” Jon learned that there was nothing wrong with him – nothing ever was. It was merely what he believed about himself that was the true illness that needed healing.

Go back to the image of the cut we used at the beginning of this article. What happens with a cut? It bleeds – but the bleeding often can help wash away the contaminants, so that when it heals, there is no infection. A scar, perhaps, but no infection. The healing of a soul is the same. The blood that comes out of a cut can be the emotion, the challenge that needs the healing; the opening of the wound the event in the life that lets out the challenge. The life may always have a remembrance of that wound, and be fundamentally changed by it, as the hand may always retain the faint scar of the wounding event. But both the hand – and the person – can heal, become whole again, no matter what the former challenge was.