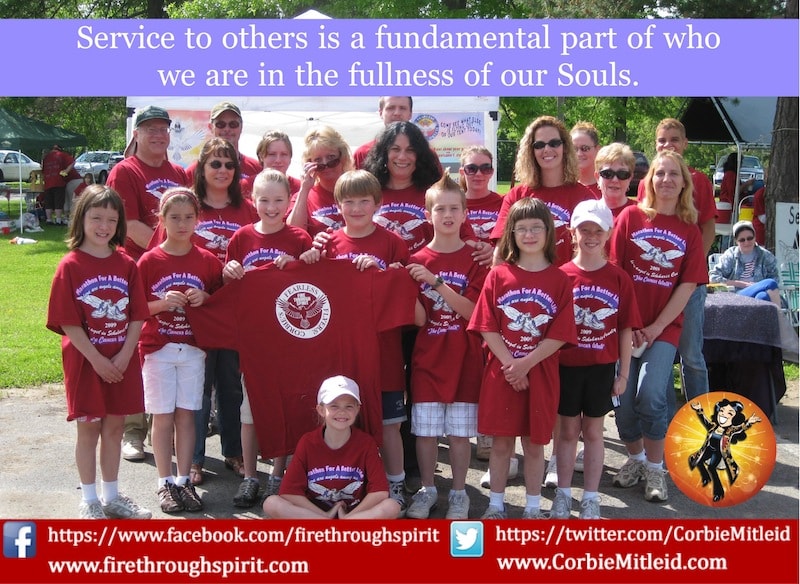 Service is one of the biggest Karmic “lessons” that people put in their pre-birth plan, and for good reason: Service can be done in dozens of different ways, some of which may not look like it on the surface. Lightworkers – those whose lives are primarily about service, both inwardly and in their observable actions – are at the “clearest” end of that part of the Karmic spectrum. But souls who choose for themselves difficult lives, emotional roller-coasters, poverty, addiction, trauma – they, too, can be fulfilling a Karma of service.

Service to others is a fundamental part of who we are as full Souls; if we are all One (as we are), and want the best and highest for all of our fellow fractions of the One, then how better to ensure that than to be of assistance in some form?

But service can also be played out – served, if you will – through life challenges and occurrences that look nothing like service to the average pair of eyes. Here are some examples:

I had a friend in Colorado many years ago who had twin boys, Marc and Leo. Leo was subject to abuse as a child, and had a severe case of “shaken baby syndrome.” The child was profoundly damaged in the violent event. Yet though he could not speak, could not do much for himself at all, the vibrant, shining soul was everywhere evident.   All of his health care team remarked on how extraordinary Leo was. People who were afraid of illness, or who could not look at a handicapped person without a frisson of revulsion, found themselves drawn to Leo, their usual distaste replaced by wonder, and a feeling of connection. Leo could look at a person right down to their core, and with no judgment; just curiosity, and welcome.

People’s lives were changed by interaction with Leo – a little lion if there ever was one. Leo’s Karma of Service was performed by bringing people out of fear into love…out of revulsion into compassion. He also happened to be one of the finest “teachers” his physical therapy team could have had, somehow encouraging them to work with him a little longer, a little harder, than they might with another child at his injury level.

Then there is the story of Alcoholics Anonymous (AA), founded in 1935 by Bill Wilson and Dr. Robert Smith. Bill Wilson was an alcoholic, which in itself can be a Karmic challenge that touches all five shades of the spectrum: contrast, healing, service, unbalanced energy and healing of beliefs.  Coming into a difficult life, with many emotional ruptures and wounds, Wilson was addicted to alcohol at an early age.   Yet his lifepath brought him into contact with the right people and the right groups that were beginning to see alcoholism not as merely a moral failure, but as both a physical allergy and a mental obsession. Wilson found that in order to stay sober, he needed a companion on the sobriety road, and a spiritual center. This was when he met Dr. Smith, another sober alcoholic who believed in this new way of viewing an old addiction (and clearly a soulmate in his Core Team).

From those discoveries and fateful meetings in the 1930s, Alcoholics Anonymous was formed. Today, Alcoholics Anonymous has over 100,000 registered local groups and over 2 million active members worldwide, and Bill Wilson is remembered as one of the most influential persons of the 20th century. Wilson gives us a perfect example of taking a life challenge and turning into service on a worldwide basis.

Those who challenge us most fiercely – the people that may be “thorns in our side” or never letting us off the hook for certain things – can be of service, even putting their own growth aside to play a role that we have asked them to fulfill in our prebirth planning.

My client Janine’s mother was a product of the South in the 1950s, believing that her role in life was to support her husband, raise the children, and never allow her own yearnings to conflict with her husband’s. That including making money. She always reminded Janine, “It’s better to marry a millionaire than make your own money; it’s not ladylike.” Even though Janine did well with things like Girl Scout Cookie sales and working a part time job in high school, her mother told her that such things “didn’t amount to much” and she shouldn’t believe it meant anything; she had succeeded because “people felt sorry for [/fusion_builder_column][fusion_builder_column type=”1_1″ background_position=”left top” background_color=”” border_size=”” border_color=”” border_style=”solid” spacing=”yes” background_image=”” background_repeat=”no-repeat” padding=”” margin_top=”0px” margin_bottom=”0px” class=”” id=”” animation_type=”” animation_speed=”0.3″ animation_direction=”left” hide_on_mobile=”no” center_content=”no” min_height=”none”][her] because [she] wasn’t pretty enough for a rich man to marry.”

When Janine’s mother was approached by a local food manufacturer regarding her gumbo recipe (which had garnered many awards state-wide for over a decade), she not only refused to have her face or name on the label, but also had her husband, a factory worker, sign the contract, believing that for her to do anything of such an independent nature would overshadow him. As a result, when the parents divorced a few years later, what could have been a comfortable nest-egg for Janine’s mother was merely money that the father took as part of his settlement.

Janine watched this and determined that “the message was wrong” – and became a patent and intellectual property attorney that specifically helps women and minorities to get the fair dealings they deserve. In this situation, not only was Janine’s mother learning important lessons regarding self-worth, in pre-birth planning sessions she and Janine also agreed that it would be pivotal to bring Janine into the service-oriented life she planned.

Even an early demise can be part of one’s service. Souls as disparate as Anne Frank, Nathan Hale and Steve Biko, all of whom became famous for the circumstances surrounding their deaths, and what they stood for while they lived, come in with the agreement and understanding that their deaths will be of service to those who seek to change the world in positive ways.

Look at your own life carefully. Look with a non-judgmental eye at the people who have been in your life, even those who have brought the most difficulty with them. If you look carefully, you might find that these people came in with a Karmic agreement of service for you, to help you attain your highest good. And when you are in difficulties, when you are having hard lessons to learn, realize that as you overcome them, you may be an example to others, thereby fulfilling a Karma of service to them as well.