Corbie’s Wayback Machine: On Soulmates Who Stay With Us 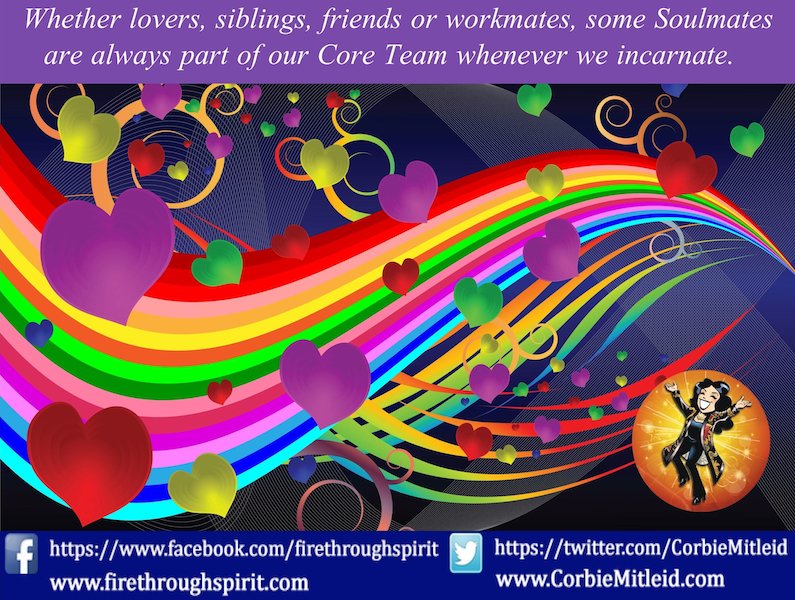 Corbie’s Wayback Machine: On Soulmates Who Stay With Us

No doubt about it — we often experience several lifetimes with our “soul mates” — those who are part of our Core Team whenever we incarnate.  We don’t always have to marry them; sometimes they can be siblings, friends, or workmates.  Here are two examples.

When I met Fred, the moment he hugged me and kissed my neck I felt like we had been together forever. We finish each other’s sentences and think the same things often at the same time. What was our past life connection?

There is a Celtic resonance here, Janet, and a life of land travel. Any life that has been “good” to you has been in the country – you are a Pagan in the literal sense, from the Latin word paganus, meaning country dweller. Lives in cities are your harshest lives, and where you get your most difficult lessons.

You and Fred have had encounters that mirror the best of the folk songs. When you are a city woman, he is the traveler that entices you away from hearth and home. Yet not all lives are with Fred as the male and you the female – you, too, have been the gypsy, the wanderer, that persuades him to leave a stifling job to go adventuring.

The particular life that resonated at that moment with Fred was one of your very earliest lives as Celts. You were someone who could communicate with the People of the Hills and their companion spirits, but as such, you chose to live alone, as the “thickness of man” (that is, his lower vibrational being) became hard for you to bear. Most of the men of the time were warriors, smiths and farmers; you needed someone who heard the higher singing as you did.

Once a year, on Beltane, the village would send a youth to you so that you might help to keep the land strong and fertile. There would be one night of love and then the youth would return to the village, to a place of honor for the year. However, one year the youth sent was less than fit, and you refused him; he became furious, and beat you. You were knocked unconscious. When you woke, it was to find the youth dead and an older man (Fred, this time) bathing your wounds.

It was someone you had slept with fifteen years before, who, while marrying and raising a family, never forgot you. The two of you left the body of the youth where Fred had killed him, and moved away, continuing to travel, never staying in one place for long. While you never had your own children, you did take in the lone ones and waifs you found, much like a travelling foster home. They would stay for a few years, and then move on. It was a fulfilling life, as you and Fred adjusted to each other’s rhythms, and set the wheels in motion for other lives together.

I was gently surprised to find that you were careful in your pre-birth planning always to meet each other either very early, before commitments were made to others that had to be broken, or later in life, when children had grown and partners had died. There is a deep sense of “the rightness of family” with both of you, and you chose to honor all commitments in your lives before meeting. This has also been mirrored this time, in that both of you are parents whose children are whole and well adjusted, and your previous relationships do not impinge on your current partnership.

Janet had this to say about my discoveries:

Truth runs through this reading. I have always felt a connection to the Celtic culture, music and art and Fred is also quite connected, so much so that for “dress up occasions” he wears clothing from that culture.

Interesting that the way we got together in this lifetime was through a mutual acquaintance, a younger man that I was dating and whom Fred had known as a neighbor and partner to his cousin for 3 years. When I “refused” this younger man’s behaviors and ended the relationship of 2 months he became very angry. Shortly after that I began dating Fred and after a few dates he gave me a sword because he was afraid that this mutual acquaintance was violent and dangerous and angry with me for ending things.

Also very interesting we have been on the peripheral of each other’s lives for almost 10 years, with many mutual friends.

Thanks so much for this great reading!!!

I have a friend that I have only known for a year and it seems we have know each other forever as if we are actually sisters rather than friends. Also, since I have been a child I have always had the same dream of a village being burned down by people with torches; and recently similar dreams have been happening but they also come when I am awake. Some of them also appear to have a witch-hunt feel to it.

Christina, while many assume that Lightworkers who have burning dreams or visions have been witches in the past that is not the case with you. What you are seeing is a plague epidemic in Germany in the early 16th century. You were a simple child, who had a natural immunity to the disease, but whose family all came down with it. The vision is from that life, when you were considered “guarded by angels and the Virgin” and taken in by another family, which included the woman you feel close to in this life. You were held back from running back into the house with the bodies of your parents and siblings.

This particular friend of yours finds it better to come in as a friend-turned-sister rather than a birth sibling. You have tried being blood related three or four times, but it tends to trigger a jealousy situation between the two of you, as she tends to come in with “more” (more beauty, more talent, more intelligence) than you have. She learns through complexity; you prefer to learn through simplicity and clear choice. In this life, one of your strong goals is to simplify, rather than overanalyze or dwell on matters that do not serve you, and be unafraid of making a choice and sticking to it. You will find that the friend you speak of is an important guide for you in this respect.