Tarot Spreads: Relationships At A Crossroads 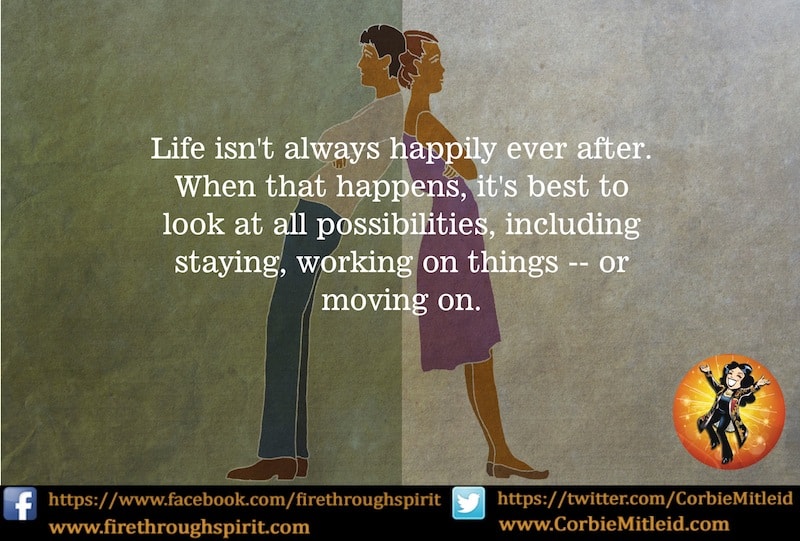 Tarot Spreads: Relationships At A Crossroads

While we’d all like to think that life goes happily ever after, the truth is that I very often get people coming to me who are contemplating divorce or separation because they simply don’t know how they feel about a relationship any more. Is it worth fighting for? Is their partner even interested in working on things? Should they just give up and move on?

When they arrive at my desk with that sort of quandary, it’s not my job to talk them out of (or into) the idea, but to show them precisely what the ramifications are at every level of change – and what happens if they go with the status quo.

When a client isn’t even sure what their options are, I show them three possibilities, each with three cards:

Let’s take a hypothetical situation: Carrie and Lars. Carrie comes to me and is concerned that the relationship is stagnant; that they are talking at each other, rather than to each other; and that there are many things about the relationship that she believes need changing but Lars doesn’t. Using my go-to Tarot deck, Tarot Illuminati, here’s what we pulled for her:

The Status Quo cards speak first of tradition, rules, and structure – the fact that The Hierophant is the Pope’s card stresses the idea that marriages simply aren’t dissolved, which may be pressure from the family. The next card speaks of constant worry, whether or not there is any truth to her fears. And the third card talks about the world around her believing that nothing is wrong with the marriage, and she can continue if she wants to play into that idea despite her worries and fears.

If Carrie chooses to confront the situation, the Temperance card says that in order to maintain her emotional mastery, she will have to keep “one foot in the current situation and one foot where she wants to go.” Things will have to be put together very differently for the counseling to work. The King of Pentacles warns that it will be costly; this is not an instant fix, but one that will take some time to resolve. The final card doesn’t bode well, however; the 7 of Swords signifies someone who will not address a situation, but dances around it, letting small talk and subterfuge carry the day; if Lars truly doesn’t think there is anything wrong, this may be his tactic. It can also specifically point to someone lying, taking advantage of a situation, or cheating in the relationship. If that is what is revealed, then Carrie will have some definite soul-searching to do.

If Carrie chooses to end things now, the 3 of Cups speaks of celebration, an easier time of things, and a light heart. The 8 of Pentacles talks about “refining down” her life, learning more about herself, and practicing being in the present moment. 4 of Swords tells of a time of sanctuary, rest and contemplation – but she must be careful that the sanctuary doesn’t become a prison.

Notice that each one of the situations is a possible choice; nothing says, “You must choose this” or “Don’t even think about this” – it truly is up to Carrie. If she is absolutely set on maintaining the marriage, she sees what it will cost in terms of emotional coin. If she was afraid that leaving would be awful, she sees now that there would be a new life available to her. But under no circumstances will I tell her what I think she should do! Why? Because that short-circuits her free will. My job is to present options, and then step away so that she can decide what is in her best interests.

In a stay-or-go situation, if there are children involved it’s also valuable to see what they might think if a separation is called for. Carrie and Lars have three: Melissa, who’s 13; Charlie, who’s 9; and Betta, the baby at 4. We’ll pull one card for each child:

MELISSA: The 8 of Wands is a communications card, and one that says things will happen very fast. A separation would slam into Melissa’s wellbeing in a big way, and she will need to talk about it at length with one or both parents. It also says she will talk about it with her friends, so if Carrie was planning to keep this quiet, it won’t happen.

CHARLIE: King of Swords. Charlie is going to try to “logic” this, rather than be emotional about it. I also sense he would take his father’s side if push came to shove.

BETTA: 3 of Wands. Betta on some level is the glue that keeps the family together spiritually; this is the “everybody is needed for success” card, so I wouldn’t be surprised if she is the one that is very blunt about “we’re a family and nobody goes anywhere” – in whatever language and understanding a four-year-old can muster.

So all of this gives a client a lot to chew on. She may know instinctively what she wants to do, or she may need to go home and think about it. If she decides that she really is “done” with the relationship, then we would move on to a separation/divorce reading, which will be covered in a separate article.