Corbie’s Wayback Machine: On What Happens When Lessons Aren’t Learned 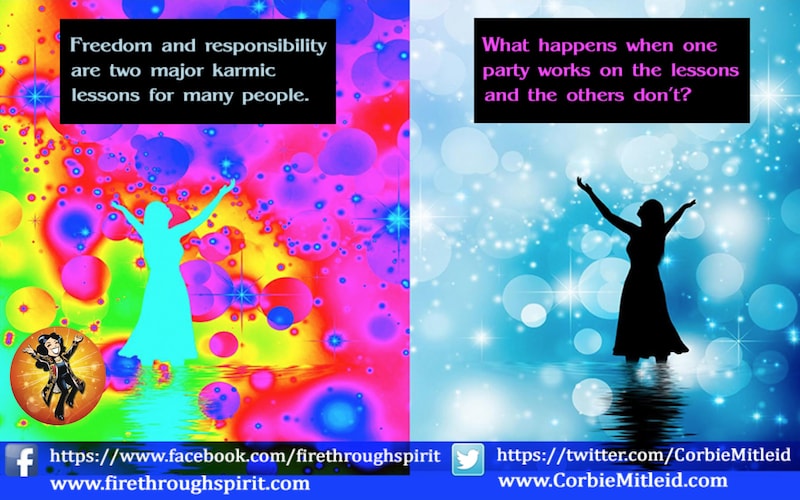 Corbie’s Wayback Machine: On What Happens When Lessons Aren’t Learned

Freedom and responsibility are two major karmic lessons for many people. What happens when one party works on the lessons and the others don’t? Does that mean that the hard working party is doomed to stay in that situation? Read on…

Corbie, I have had a terrible life with my father Sam and husband Ronald (“Bucky”). Even though Bucky and I dated since high school and have been married over thirty years, I was always been caught between them, each one thinking I needed to be on THEIR side when arguments erupted.   I couldn’t get my own life in gear because I was told I was always responsible for their fights and fixing things, even if I was nowhere near them when they started the bust-up.

Now that Dad is dead, I’m leaving Bucky. Does that mean I failed in my karma? Why did I bring this on myself? I want a life where I can live for me, not be told constantly by someone that I’m selfish for thinking about myself instead of them.

Marla, you have come in to discover/uncover what it means to break chains. Chains of responsibility not yours, chains of fear, and chains of similarity.

It is to be understood that you, your father and your husband have danced this dance many times.

The first connection of your father and husband was literally in prehistoric times. In hunter-gatherer clans there was no such thing as “slavery,” yet Sam and Bucky were known as brutal and vindictive people. They were tricksters who would manage, through deception or outright intimidation, to cadge others out of their kill, their furs or their shelter. Marla, you were a member of a stronger neighboring tribe, and kept very safe by a loving family and a LOT of brothers and sisters; you were not harmed by Sam and Bucky. You were drawn to Bucky when you were children, and grieved as you saw him “turned” by Sam from a relatively normal, relatively kind person to a nasty, brutish “taker.”

Sam and Bucky were after the same kill one day. Sam had been feeling his age, and was aware that Bucky might soon be able to take over/take things from him. When he fell into a snare/trap and was badly injured, Sam saw the opportunity to get rid of him, and left him. You heard his groans, and rushed to see whayou were happening. Bucky was too far gone, and all she could do was stay with him until he died.

This set up the following karmas:

The next life was in 10th century Scandinavia, when Bucky was part of the Varangian guard, a unit of Norse warriors who were personal bodyguards to the Byzantine emperor. You were a Byzantine minor player in the emperor’s household.   You were both male, both relatively the same age. Bucky was an illiterate; you were well-learned. You struck up a casual friendship at a gambling house, which became more defined as Bucky – relentlessly curious though untaught – was fascinated by just how much knowledge (much useless to a warrior, but intriguing nonetheless) you had. You, understanding that fighting was necessary but you remained averse to it, tried to teach Bucky a little about negotiating and “thinking around the next corner,” which actually ended up helping Bucky in several battles. You could not, however, convince Bucky that war and killing was not the best way to handle things, and you eventually came to verbal blows over his handling of captives. The friendship ended abruptly.

The next relationship between you and Bucky was one of husband and wife in 16th century France during the Reformation. Your genders were the same as now.   An arranged marriage, you were practical and it worked, though there was no romantic love as we know it today. Originally married in the Catholic Church, Bucky became enamored of the Reformation movement. You were terrified for his soul, and the fact that it put your family in danger. You tried several times to talk him out of/away from the secret meetings and study he was doing, but he would shout you down and often physically abuse you, until you were cowed. You saw your husband start to teach your children the line of dangerous thought, and finally went to your confessor, a long time family friend, and told him of your fears, thinking he would help you get Bucky back on the right track. What actually happened was that Bucky and your son were dragged from their beds, tortured and condemned to death when they would not recant. You were forced to watch their execution with the Church’s idea that it would impress upon them everything they “lost” through their heretical behavior. As they burned, they shouted curses at you, calling your their “true murderess, for the which God will make you pay in the fires of madness and Hell.”

Your young daughters (all under 10) were not considered corrupted enough to imprison, though they were all taken away to separate convents to make sure their Catholicism was intact and there was no residual influence. While you was told you was a good “daughter of the Church” by the Catholic powers who condemned your husband and son and stole your daughters, you were left bereft, alone and penniless. You ended up a beggar, because no one wanted a woman ‘tainted with heresy’ working for them. You died within a couple of years, tormented by dreams of your burning husband and son.

Because in this life the “cooperation and trust” you sought to bring to the relationship went completely in the opposite direction, you decided to try it the other way around with Bucky in the next life together. You also decided that you would not have children with him again until issues were resolved.

The 18th century Enlightenment in England found all three of you together again, as gentleman friends.       In the mid-1700s, debating societies were the rage in London, and all three gentlemen were very active in them. You were known for your cool rhetoric, and complete trust in reason over emotion. In fact, you were found to be rather cold. Bucky was more florid, more emotional, and truly what would be called “an oratorical master” in the next century, given to huge expressive movements and the sweep of language, rather than cogent argument. Sam was a listener and a manipulator. He’d grown up the youngest in a large family and had some mild facial disfiguration that he hated, so he wore a hat whenever he could and walked with his face slightly turned aside from people with whom he spoke, resulting in awkward posture after many years. Very self conscious, he hated people who were happier, healthier, better looking than he was. Less wealthy and intellectual than the other two, he kept quiet, in the corner, and attended more to find out who was “useful” to him and who wasn’t. He was also something of a petty thief.

You and Bucky were “friendly enemies” and referred to each other as “the gentleman in opposition.”   However, both of you were very much upstanding, conservative and “to the right” sorts of fellows. The two of you discovered what Sam was doing, and decided to put a stop to it, but in a way that would catch him red-handed and dismiss him from society. You did this at one of the meetings, where Sam was tempted with a large pouch of crowns carelessly bulging from your pocket. Bucky unobtrusively kept his eye on Sam, and when he went for the cache, Bucky called him out. Sam was summarily ejected from the club and arrested, spending some time in Newgate.

Marla, the current life has been engineered for you to work on differences making good sparks. It was to be hoped that the differences among you three could be mutually supportive, even if one did not believe as the other, and one had different interests than the other. If you have learned that differences do not need to be resolved to mark you as valid; if you have accepted that not everyone will approve of you and move forward anyway; if you can take what you have learned from these relationships and pay it forward for those who come to you in the future abused and tormented as you have been, then all is as it should be, and all is enough.