What Are the Rules About Talking To Dead People? 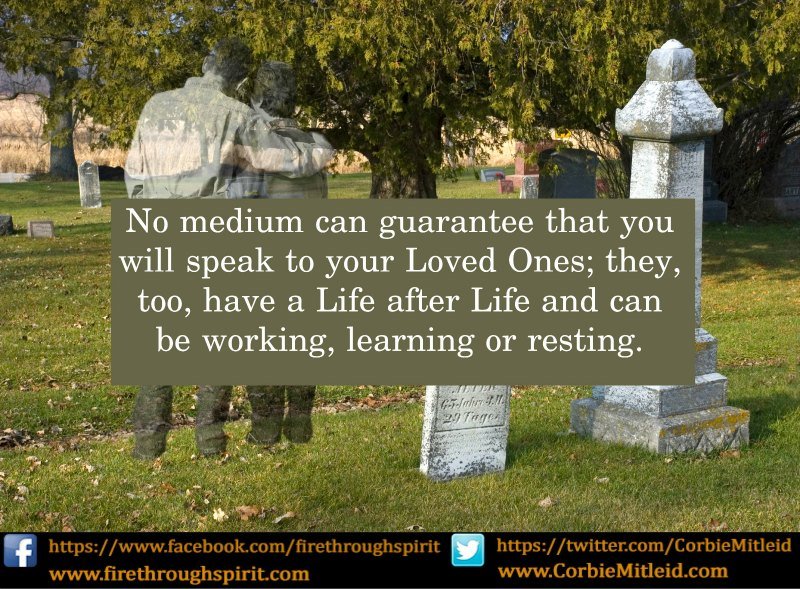 What Are The Rules About Talking To Dead People?

I was interested in talking to someone that has passed away that is important to me. I tried a medium in Sacramento but she would not verify any information on the individual so I can know it is real. She even said the individual was with us at that time, so I did not set up an appointment with her. What type of medium are you, and can you have clear vivid conversations with the astral/celestial spirits you are talking to?

Daniel, the first thing you need to know about ANY psychic medium is that none of us are 100% accurate, nor are we “dial-a-dead” — there are occasions and situations where the departed spirit simply isn’t around to talk to. We don’t stop ‘doing’ when we die: there’s a lot to do outside the body. We have lessons to learn, places to go, jobs to do. My own father, a marvelous cardiologist who died in 2001, is still doing medical consulting with certain of my intuitive colleagues!

My mediumship style is specific from the get-go. I do not fish for names or relationships; I feel that is a waste of time. I ask for the full name of the person you want to speak to, how they are related to you (mother, best friend, former professor), the year they died, and how old they were at the time of passing. While that gives me no specifics, that does get me into their energy field. I will then tell you the kind of person I’m picking up. If it feels to you as if we are getting your loved one, then I will ask for three or four things that you will remember. It could be a gesture, a habit, a physical recognition symbol. It varies. Things I have gotten:

At the same time, I would caution you against coming in with a specific set of criteria or keys you MUST receive to believe it’s your person. That sets it up to be a “prove it to me” parlor game, and is never successful. Example: my father’s tag line, whenever he called the youngest generation on the phone, was always “This…is the Mysterious Stranger!” And though I’ve spoken to him dozens of times since his death through my own abilities and those of others, he has never come in with that most beloved and amusing of phrases. Lots of other things were on target — but never that.

One last caveat, at least with working with me: if you don’t remember your person — say they died when you were two, or in some cases even before you were born — it’s probably not going to be satisfactory for you because you won’t have any visceral, “gut” memories to draw on. I’m very picky about information regarding dead people, because it’s too easy to get bamboozled, so I insist on having information that you can recall from personal experience.

To find a good medium, ask to see the medium’s testimonials or for references to call. If someone’s truly good, the “word on the street” will let you know.

Got a question about metaphysics, spirituality or how it all works?  Write to us at ASK CORBIE!

No comments to show.
Manage Cookie Consent
To provide the best experiences, we use technologies like cookies to store and/or access device information. Consenting to these technologies will allow us to process data such as browsing behavior or unique IDs on this site. Not consenting or withdrawing consent, may adversely affect certain features and functions.
Manage options Manage services Manage vendors Read more about these purposes
View preferences
{title} {title} {title}