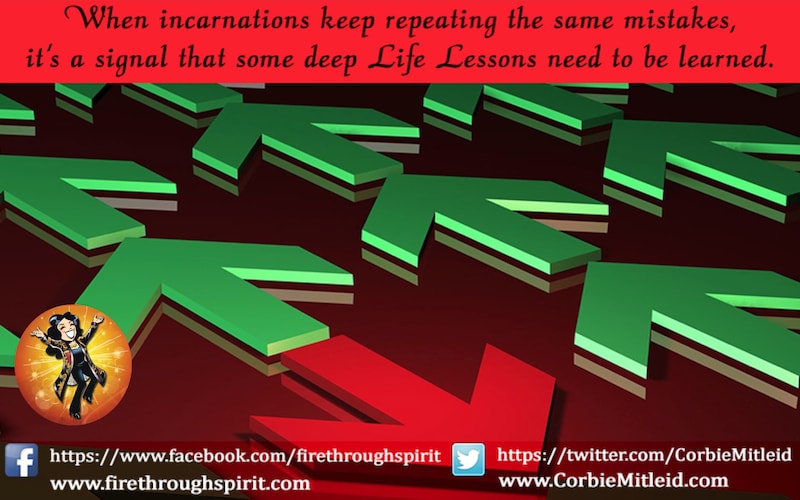 I had a 9-year relationship with a man, “K,” that was both the best and the worst experience of my life – truly the agony and the ecstasy. For six of the nine years, he literally led a double life between his wife and me – whom I thought he had divorced years before (I actually saw separation papers early on, but evidently he reconciled with her and didn’t tell me). The relationship continued for three more years after his wife and I found out (and he actually DID begin divorce proceedings). This was a very intense and passionate relationship – when we walked together it felt like one person was walking, and I could actually feel the energy of his touch on my skin. Conversely, he had a terrible temper and emotional/mental problems. Three years have gone by since the relationship finally ended and I still am not the same. Please tell me what the purpose of this relationship was, and what my connection is/was to this man?

Jesse, this was a case of “repeating the mistake.”

I see this in the nineteenth century, in South Carolina. K was a wealthy man – but his wealth came from many areas: slave trade, import/export of spices and silks, and “shakedown” protection for many businesses. Not quite Mafia – he was of Welsh descent, rather than Italian – but the methodology was the same. And he absolutely adored the make or break, life and death power he had.

You were a woman in Georgia that he had known since childhood – a second or third cousin, not nearly as wealthy as his immediate family but still quite comfortable. You had married young and had two children. Your husband felt distant. It wasn’t that he did not care for you, but he was wrapped up in work and church and felt that lovemaking was for procreation only.

There were the occasional trips to Savannah for both of you and that is where you met again, when both were in your late 20s. Your husband was having dinner with him about some business, and you came along since you had known him before. You were quite striking – red-blonde hair and grey eyes – and two children had not lessened your looks. K decided that he “wanted to know his cousin better” and offered to squire you around town the next afternoon. The “cousin” line meant that your husband did not think twice about it.

That afternoon started an affair that lasted through the Civil War. K told you the same lies – that he was not married when he was. You knew that this affair was terribly sinful, but you were so touch-starved that you threw caution to the wind and trusted the old childhood friendship to see you through. You made sure you did not get pregnant through use of some truly noxious herbal infusions. He gave you the usual lines about “no other woman would ever suit me for marriage” and “if only” and “if you ever find yourself in trouble, I will be there.”

After the war, when he had gone North, you wrote to him and asked for help, you were shocked to find your letter returned to you, torn into bits with a letter from his wife castigating you for your whorish ways, and detailing how he had been married for fifteen years and had four children and clearly you were delusional. It turned out that he had houses in Philadelphia AND South Carolina, as he had played both North and South through intermediaries during the War to make sure he came out on the proper end of things. He also had several aliases.

You were devastated and committed suicide when, after many more attempts at communication, you got a letter from him threatening dire consequences if you bothered him again. K saw it as a romp that had played itself out. You saw it as ruining your entire existence.

This is a man who will have a great deal of Karma to work through regarding truth, relationships and honest dealings. For you, the lesson is emotional independence. As sweet as bad drugs can be, they are still bad drugs – and that’s a perfect description of this fellow. Go through the withdrawal symptoms, and then make sure from here on in that its friends first, THEN lovers. Additionally, guard yourself against going from “drama to drama” – look at your serious relationships and ask yourself if the excitement drowns out the reason. For every ”bad biker boy” that gives us grief and sorrow along with the excitement, there are the “Father Mulcahey” types who will always be honest, monogamous, and loving, though perhaps a bit calmer than you are used to. And those are the ones with staying power.

I am a city boy who always wanted to be a farmer and finally got the chance as an adult ten years ago. My family was one that was devastated in the hurricanes last year. It wasn’t the loss of our house or possessions that ripped me apart, but the loss of the livestock. I felt like each animal that drowned was a murder on my soul and I have the feeling this has happened before; it was eerily familiar. Could I be remembering something?

Micah, I see a life in the late 1930s in New England. Your father was a fifth generation dairy farmer and you were raised to carry on the family business. The fact that your father had maintained the farm through the difficult years of the Depression was a tribute to his fierce determination and love for what he did. You had his gentleness with the animals and the ability to know innately when one was sick, or pregnant, or distressed. You loved helping out with calving, and the animals in turn knew you were “one of them, just with one set of legs” – how well you worked with them was legendary in the area. Working the farm was all you ever wanted. You quit school in the eighth grade.

There was a terrific storm – I’m sensing the hurricane of 1938 – that came up and decimated the farm. A lightning strike set fire to the farm buildings, and the torrential flooding drowned the herd, with no place to go. Your father had no insurance, and the family lost everything. You all moved to the Midwest where another relative had a farm and worked there until he sold it in the early 1950s, but both you and your father were broken men. You used to have nightmares about being buried under dead and drowned cattle and wake up screaming, until you finally moved to the nearest big city and got a menial job. The city noises helped drown out the sounds of your nightmares, but you always felt like a fish out of water, knowing that all you really wanted – or had known – was gone forever.

The fact that the urge to farm carried through to this lifetime is no surprise. However, it is important to remember that farming has its challenges, and one of them is Mother Nature. In a hurricane like Irene, there was no way you could match her power and fury. Bless the memory of the animals you lost, and if you can rebuild, please do so.

I must have an Indigo child! He has been very, very fussy for weeks, especially at night. Nothing seems to comfort him until we take him outside to look at the stars (we are very rural, so there are lots of them). He immediately calms down, just staring at them and almost talking to them (he is six months old). Is he an alien?

Darcy, no, he is not an alien! But what I do sense is that this little person used to be a mountain boy in the Italian Alps for at least two lifetimes. In one life he was a clockmaker, constantly focusing on infinitesimal clock pieces and cogs, which led to constantly tired eyes and headaches. Going outside at night, resting his eyes on the dark horizons and the tiny pinpricks of twinkling lights gave him a sense of peace and beauty. And in the other, he was a simple goatherd who was more at home with his animals than his people, and spent as much time as possible during the warmer months “living rough” with his charges, sleeping under the stars. They were his friends, his guides and his comfort.

I would not be surprised if he ended up in the astronomical sciences when he is older. They will always “talk” to him in a way nobody else understands.

No comments to show.
Manage Cookie Consent
To provide the best experiences, we use technologies like cookies to store and/or access device information. Consenting to these technologies will allow us to process data such as browsing behavior or unique IDs on this site. Not consenting or withdrawing consent, may adversely affect certain features and functions.
Manage options Manage services Manage vendors Read more about these purposes
View preferences
{title} {title} {title}