“No” Is a FABULOUS Idea! 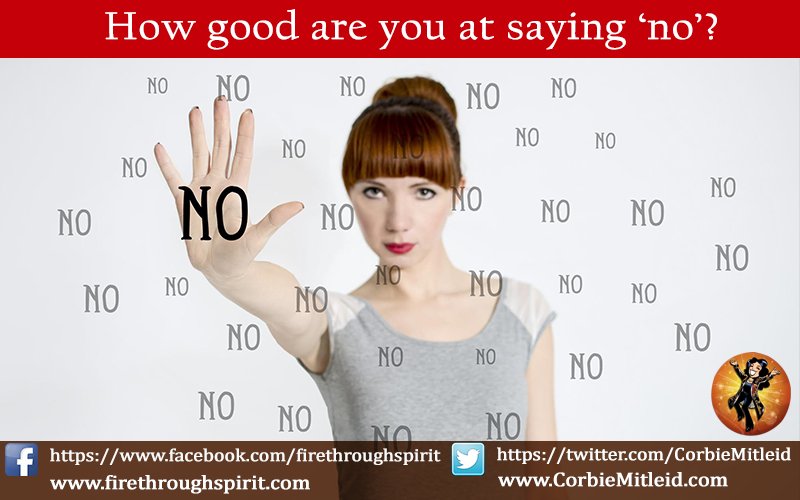 “No” Is A FABULOUS Idea!

It’s guaranteed that, no matter what show I do or where it is, someone sits down with me and talks about stress. Sometimes it manifests as a foggy brain, or a feeling of depression. Often, when I ask them what they want or what would bring them some happiness, they stare at me blankly. “I don’t know. I never think about it.”

I probe a little more and I hear the familiar litany about the spouse needing them, and bosses, and the coworkers, and the kids, and then there’s the high-maintenance friend and the PIP (pain-in-the-patoot) of an in-law.

Time for a little Spiritual Awakening, no?

So I zero in and ask The Telling Question: “How good are you at saying ‘no’?”

They blush. They laugh. They duck their heads. But they always say “not very.” (If they say “I’m trying” that’s just another way of saying the same thing.)

So I tell them I am going to give them a magic sign. Maybe they expect Egyptian hieroglyphics, or a spell, or a magic amulet – but it’s much simpler than that. I pull out a specially-printed postcard for them and hand it to them., on which is scribbled in big capital letters

And I hand it to them with the admonition, “Put it on the ‘fridge!”

You see, there’s not one of us out there that hasn’t become a Crispy Critter running the Red Queen’s Race. As the Queen herself says in Alice in Wonderland, “…it takes all the running you can do, to keep in the same place. If you want to get somewhere else, you must run at least twice as fast as that!” And if you’re in the Serving-the-World business, as so many of us Lightworkers are, it hits us doubly hard. Not only do we want to be of service to others, both globally and locally, we are hard-wired to think of service as our greatest gift. So we rarely say ‘no’ to anyone, assuming that the Universe will give us the wherewithal to go the extra mile, help the extra person. We forget that we, too, have needs that deserve to be fulfilled.

Sid was Moses’ second cousin, and he was leading a bunch of Israelites over on the other side of the desert. It was hard. It was hot. Everyone was hungry and thirsty and tired and cranky, but Sid kept them going with cheery words and the constant promise that he would see them safely to The Promised Land – or at least, Miami.

Suddenly, they happened upon an oasis. There was ONE tree, ONE well, and ONE bucket to reach down to the water. And Sid was the only one who knew how to winch up a bucket to bring the water to the lip of the well.

Sid turned to his flock and said, “O my people, I am the Great and Noble Sid, and I have promised that I would take care of you. So I will see that you have water so that you will not die of thirst.”

Sid went to work, winching up bucket after bucket of water, but never drinking himself, because, after all, “I promised you I would take care of you. I’ll drink when everyone else has drunk.”

Now, if Sid had been smart, he would have said, “O my people, I am the Great and Noble Sid, and I will see that you have water so that you will not die of thirst. But in order to take care of you all, I need the first drink!” And he would have drunk his fill, and thereby found the strength to get everyone a drink afterward. And they all would have celebrated at the Four Seasons Tel Aviv – or at least the Miami Hilton.

That’s why centuries later, the descendants of that noble but misguided man have a saying, which they recite to each other when someone starts to go down that martyr’s path: “Don’t be a Sidiot.”

The moral of this story – and that little five-word incantation — is simple. No IS a fabulous idea.  What we would share with others, we must also share with ourselves. What we gift to others, we also deserve to receive. No matter how much you want to do for others, you have to take care of yourself first, or there won’t be anything left to give to anyone else.