Why You’ll Probably Never See Me On a Reality Show 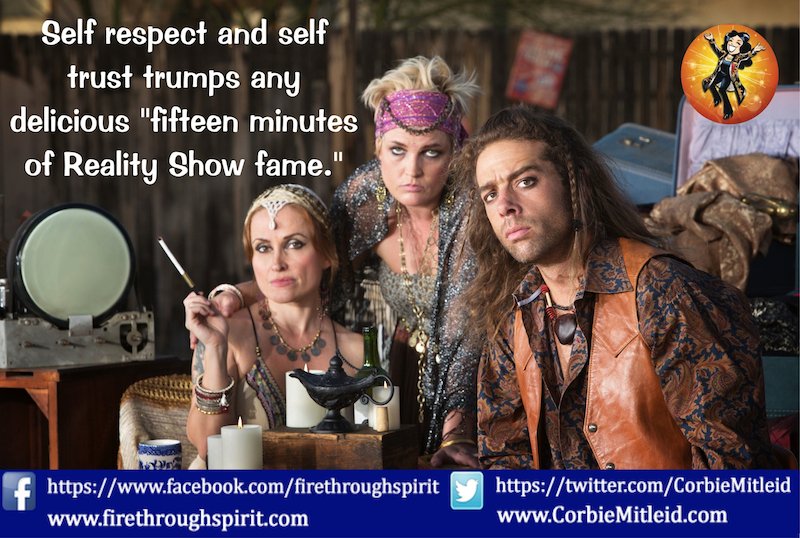 Why You’ll Probably Never See Me On a Reality Show

This is the story of why you’ll probably never see me on a Reality Show.

There was a weekend recently that was interesting from several points of view, from fabulous (record number of people read and an abundant take-home) to horrific (my show wallet with $800 in cash got lifted at the Homewood Suites where I was staying). And right in the middle – let’s say in an intriguing and lesson-giving sort of way – was an encounter with a television producer.

I liked her energy and what it sounded like she was putting together, though she wouldn’t give me any details. In a lot of physical and personality ways she reminded me of the stellar news/political reporter Susan Arbetter, who I’ve loved for years. She chuckled at all the right places in my usual banter. So when she said she’d like a reading with me, I was pleased to arrange one that day. She did say she expected it to be for free, as this was like an “audition.” Well, I am used to that kind of thing from media types, so I said fine, even though that is usually not my policy at shows.  Besides, maybe this is the way she was going to get a Spiritual Awakening, and I was the delivery system.

At her appointed time, she rushed into the booth, energized from a healing session with one of the bigger names on stage that day. I started to read. And I very quickly realized I was not going to be what she wanted.

One of the main reasons why you’ll probably never see me on a Reality Show: My readings are like no one else’s – and I don’t say that with hubris; it’s just fact that my style is different from most. When we read Tarot, she commented that it just seemed so “random.” I did a short past life reading and I’m not sure how she took it; she didn’t appear to click with it. She asked for her spirit guides and I apparently came up with one she found “charming” but I don’t remember (I never do). And hurrying at the end of the session she asked for her aunt, and to tell her “something I couldn’t know that would be a verifier.” When I have a minute and a half to get someone at the end of a session, and am given that kind of “give me what I want now” order, it generally doesn’t work; as I say, I’m not dial a dead. She also questioned why I needed to do several things the way I do several times, rather than observe and be present.

It ended up that I simply looked at her and said “Look, I’d love to be part of what you are doing but I am clearly not what you want.” She still got her free reading out of it – what managed to get done, anyway. She was charming and said she’d keep in touch. But I’m not holding my breath.

Shows like the Long Island Medium and the Big Name Folks have set the bar so that it’s assumed we SHOULD all work the same way they do, pulling things out of the Aethers and amazing everyone. And I simply don’t. Why? Because I’m not in it for the amazement value. I’m in it for serving my clients. And if my particular style works best FOR ME to achieve that, I’m not going to consider myself “lesser” because I can’t stand up in front of an audience and say “I am getting someone in golf shorts with a pink umbrella who says her name is Claire and she died of pancreatic cancer” in the hopes that someone knows who this is and this is a Message From Beyond. (Yet another reason why you’ll probably never see me on a Reality Show.)

I give huge props to those mediums who can do that. My fellow student with John Holland and soul-brother Savonn Champelle can do that; so can my New York compatriot Allie Cheslick. But not me.

But I’m learning that my best gifts, my strongest gifts, and the gifts that really do change things for people, are my abilities to teach and to inspire with talks and lectures. And that sort of thing will never be the razzle-dazzle that a reality show looks for.

Am I good enough to be famous? Yes, I am. Will I be? Probably not for my readings, at least not in the hypehype media world. But the year this happened was a “1” year for me numerologically; that’s a year for setting new roads and finding where I truly love to be. The two astrologers I consult most often, Stephen Jarvis and Sharita Star, have both said that I should expect to be off the road as a Travel Channel by 2017, or I’ll be burned out. Doesn’t mean I won’t travel to speak and teach, but it’s not going to be 45 weekends on the road, reading 58 people in 25 hours of showtime as I did that weekend in New Jersey.

So here’s the deal, if any of you producers are reading this: if you call me and say you’ve got a show and you want me to audition and it involves proving to you that I’m good: thanks, but no thanks. On the other hand, if you come to me incognito, simply as a client, allow me to do my work in a situation that doesn’t have “prove it” as the first energy I need to deal with, and THEN say “you know, I really like what you do, would you be interested in considering a television/radio gig?” then I will absolutely, positively, delightedly talk to you about your project and how I might be a good fit.

But from now on, and the biggest reason why you’ll probably never see me on a Reality Show: my self-respect and self-trust trumps any delicious Fifteen-Minute-Of-Reality-Show Fame that gets dangled in front of me if I perform on command for the person flinging out the bait.