Your Truth, My Truth, and the One In the Middle 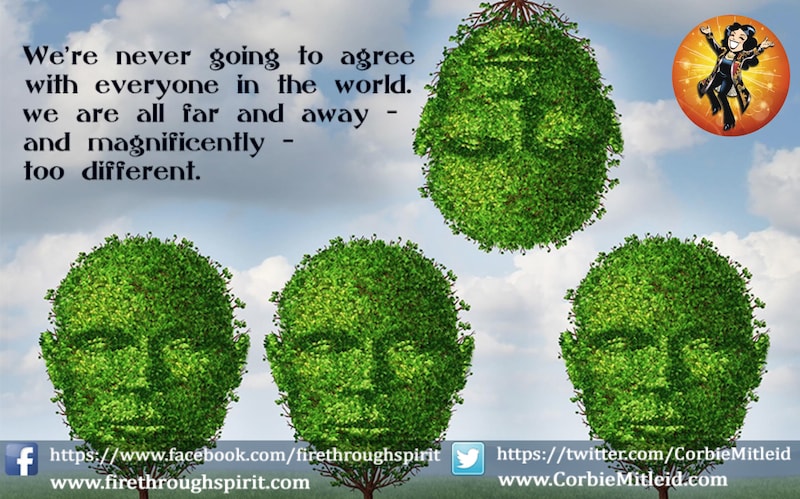 Your Truth, My Truth, And The One In The Middle

Facebook can be an amazing place, where you find yourself counseling, cheering, or confronting matters with total strangers. A few days ago, I watched a fascinating rollout of “my beliefs trump your beliefs” on a friend’s posting regarding wanting to feel better by shedding pounds.

The friend asked us all to make a wish for her to lose a pound, and was checking to see if the number of wishes might influence the number of pounds she loses. In the midst of all our well-wishing, one person jumped in and stated firmly her belief: what my friend was asking for was wrong, weight loss never works, it’s a scam, and she could not do what my friend was asking.

Here is how I weighed in:

… If someone wants flowers, it is neither productive nor kind to tell them we don’t approve of flowers and they should really want a tree.

From the time we are little, we are told wanting something is wrong: we’re selfish, we’re silly, we’re stupid to want it, we’re bad, who do we think we are to want it? From parents and teachers and authorities until we don’t trust what we want and can’t even access it. It is one of the hugest problems my clients have — they talk about what they don’t want all the time, but when asked what they do want, they don’t know, or even say, “I’m afraid to find out.”

If our friend wants flowers, I say give her a gardenful…and when you ask for trees, we’ll give you a forest.

The person to whom I directed my comments proceeded to tell me I “didn’t understand” — that I was wrong, chapter, verse and footnotes, for honoring what my friend asked for.

Others weighed in. I stayed in what I call “OptionThink”: being that happy Martian detective, not believing I needed to understand or predict what was happening or would happen, but continuing delightedly and curiously to ask questions to further understand the situation without ‘spin.’

Eventually, the person whose page it was asked the strident person to leave. Which she did, after saying that we were all wrong; that we were terrified of thinking the way she did and acknowledging “the truth”; and that we didn’t even have the guts to admit it to ourselves.

My final words to her were these:

I respect and acknowledge your right to believe whatever you like. I also ask that you respect and acknowledge my right to believe in different conclusions than you have come to.   I have spent 30+ years working with the Option Institute, which has taught me that we all believe whatever we believe because it is how we can best take care of ourselves — and we are our own best experts. I neither judge nor condemn. I only ask that you accord me the same non-judgment regarding how I view the world.

And lastly…I refuse to fight. We fight when we believe we have something to lose if we don’t. And I have nothing to lose, and everything to gain, by supporting my friend and letting disagreements float by without hindrance.

I leave you with the following question to play with: what do you think would happen if you held your beliefs in a forum but did not feel the need to prove opposing beliefs wrong?

We’re never going to agree with everyone in the world. We are all far and away – and magnificently – too different. So there will always be questions about what you do, what you think, and how you intend to walk your road when you’re with others. The key is not to fear questions. Don’t see them as attacks, invalidations or nay saying, but rather opportunities to share your knowings with others and discover if theirs are as delicious to you in one way or another. The other person’s beliefs might be highly compatible with yours. They might simply serve up more food for thought, and engender more questions to dance with.   Or they might be 180 degrees away from where you are, and you’re content to be on the other side of the river from them. But you — and they — are always correctly aligned, as long as there’s room for both sides. Questions, as Barry Neil Kaufman says, are not so much signs of doubt as opportunities to crystallize what we know.